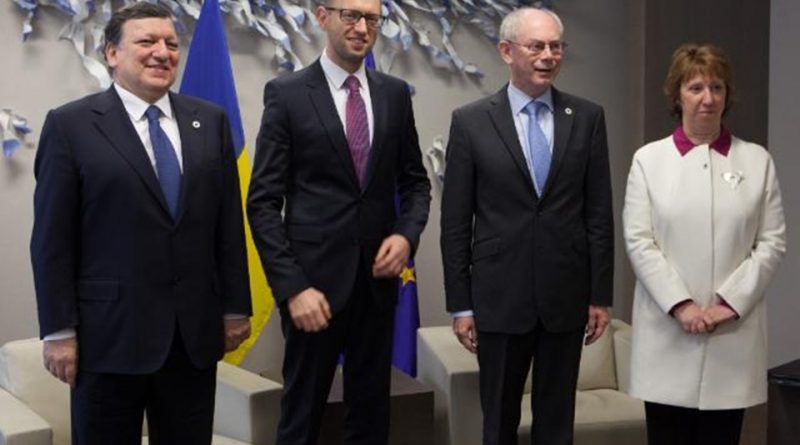 A March 6 special meeting of the European Council on the Ukraine crisis agreed to suspend visa system easing talks with Russia and signalled a readiness to impose more serious sanctions if Russia declines to engage on talks on the crisis.

The Brussels meeting took place against a background of a further day of drama in Ukraine, during which those currently in power in Crimea voted for accession of the territory to Russia and brought forward a local referendum on this issue to March 16.

The accession to Russia move was rejected as illegal by the EU and the United States.

Van Rompuy said that EU leaders had decided to take actions including those envisaged at a March 3 meeting of EU foreign ministers.

The EU leaders also confirmed their willingness for the bloc to sign an association agreement with Ukraine ahead of elections in that country scheduled for May 25.

The Ukraine crisis the “most serious challenge to security on our continent since the Balkan wars” of the 1990s,” Van Rompuy said.

European Commission President Jose Barroso presented the 11 billion euro support package for Ukraine proposed by the commission the day before, with a number of concrete economic and financial measures to assist Ukraine.

He said that the Commission stood by a united and inclusive Ukraine and supported its prime minister and its government in coping with the immense challenges ahead.

“Our first priority is a negotiated and peaceful outcome to the current crisis,” Barroso said.

He said that the EU also had conveyed a strong message of support to Ukraiian prime minister Yatseniuk and his government, and through them to the Ukrainian citizens.

“Not only we have reiterated the European Union’s commitment to signing the Association Agreement – including a Deep and Comprehensive Free Trade Area -, we have also decided, as a matter of priority, that we will sign very shortly the political chapters.

“This means notably the general principles, the part on political cooperation and the Common Foreign and Security Policy (CFSP) of the Association Agreement. This will seal the political association of the European Union and Ukraine,” Barroso said.

He said that EU leaders also had expressed their readiness to support Ukraine to stabilise the economic and financial situation.

“I am pleased that the European Commission’s presentation of an European Union aid package of a total amount of 11 billion euro has been welcomed by all heads of State and government today. The prime minister of Ukraine has also expressed his gratitude for this very substantive package of support,” Barroso told reporters.

Now implementation was key, he said.

As to the issue of implementation as quickly and effectively as possible, Barroso said that the package of immediate short and medium term measures offers financial, economic, trade and technical assistance to Ukraine.

“I recall that three billion euro of these funds will be drawn directly from the EU budget to support democratic reforms and the modernisation of the country’s economy.”

It is crucial that the reforms which are linked to this assistance were “fully owned” by the Ukrainian authorities and part of a national reform programme for the country, Barroso said.

We can make a real difference for Ukraine with this package, which also includes support from European-based Financial Institutions, namely the EIB and the EBRD. And it is part of a wider European and international effort by member states, but also by our international partners, including the IMF and the World Bank.”

The Commission was also ready – and had received support at the March 6 meeting – to work fast to adopt proposals for unilateral trade measures already in the next weeks.

“This will save Ukraine hundreds of millions in import duties. This can help our friends in Ukraine a lot,” Barroso said.

Another issue discussed was energy security, he said.

“Because energy security is essential for the stability and security of Ukraine. We will speed up work on reverse flows and on the modernisation of the transit system.”

Barroso also underlined that the Ukraine crisis “is the certainly the most serious situation we are facing in the European continent in many years in terms of stability and threats to peace. We need to show our citizens and the people of Ukraine that we are up to this task”.

The EU, he said, was acting to support the democratic choices of the Ukrainian people and to help guarantee Europe’s peace and stability.

The Republic of Moldova at a crossroads