The political arithmetic that could decide the future of Bulgaria’s 42nd National Assembly has been changed by the entry of a party that has less than a handful of seats and was not elected to it.

Since the election of the current Parliament in May 2013, an issue that has dogged it – and the parties in power – is that of achieving a quorum to conduct proceedings.

The initial arithmetic presented, on the face of it, a possible deadlock.

The parties that were to end up forming the governing coalition together had 120 seats out of 240. The others were in the hands of the single largest party, centre-right opposition GERB, then with 97, and far-right ultra-nationalists Ataka, with 23.

Approval of the cabinet and a series of subsequent sittings were possible only because of the co-operation of Ataka, which put Volen Siderov in a position to make demands of the ruling axis. This was especially true, but not only so, in the months of GERB’s somewhat incoherent boycott approach.

The hold that Siderov had led him to liken himself to a potted plant that needed tendering and watering by the governing parties. It also was poison ivy for the ruling axis as accusations routinely were levelled against them because of their dependence on a party notorious for its xenophobia and policies of intolerance.

In recent weeks, Siderov made public a list of 10 demands – varying only in their degree of ludicruousness – that he wanted the governing coalition to acquiesce in, or face the loss of his quorum supply service.

Siderov added that were his demands not met, he would bring down the government and the current Parliament. It was a threat that rang as hollowly as a single shrill cry in an empty parliamentary chamber. All opinion polls suggest that Siderov’s co-operation with the ruling axis, which includes a party led and supported in the main by Bulgarians of ethnic Turkish descent, have cost him any chance of his party returning to the next legislature.

This sum of all things has been changed by the acquisition of a few MPs by “Bulgaria Without Censorship” (BWC), the party formed around former television talk show host Nikolai Barekov.

Either two or three MPs, depending how they are counted. The question of formally sitting in the BWC interest is slightly unclear, given that one, former GERB MP Krassimir Stefanov, appears to have been recruited to BWC as an “expert” (he is a former head of the National Revenue Agency) rather than as an MP.

The other two MPs are Roumen Yonchev, of an agrarian party that is part of the BSP-led Coalition for Bulgaria parliamentary group in spite of Yovchev’s party being a member of the EU-wide centre-right European People’s Party, and Svetlin Tanchev, now with BWC after resigning from the GERB parliamentary group in December.

Reaction from the leaders, respectively, of the BSP and GERB to the defections of their MPs was predictably different.

BSP leader Sergei Stanishev decided to publicly laugh it off, smugly sneering at journalists at a February 25 news conference that whether Parliament would have a quorum would depend on the “independent” MPs and the dependence on Ataka that the media had pointed out for months now had fallen away.

Stanishev was confident that the independent MPs, as he called them (technically true because their number falls far short of the 10 required for the formation of a recognised parliamentary group), were “interested in having a working Parliament”.

He criticised Yovchev by saying that the MP was not being correct towards the Coalition for Bulgaria because without having been on that coalition’s election candidate list, Yovchev would not be an MP.

GERB leader Boiko Borissov, in a series of remarks, made a scornful comment aimed at the BWC’s Barekov, saying that “if you have money, you need not take part in elections, you can buy MPs directly”.

Borissov also poured scorn on Barekov’s claims that BWC was a centre-right party, issuing a challenge that if this was true, BWC would deny Parliament a quorum.

The coming days would make it clear whether BWC genuinely was a centre-right party or simply a crutch for the BSP and MRF, Borissov said.

Barekov, who has lavish ambitions regarding his party’s performance in Bulgaria’s May 25 2014 European Parliament elections and imagines himself either a future prime minister or president or both, exulted publicly on February 25 in the hold that his party now had over Parliament.

But he spoke only of possible calls for early national parliamentary elections depending on the outcome of the European Parliament elections.

Barekov, formerly boss of a television station in the stable of Irina Krasteva, mother of controversial MRF MP Delyan Peevski, signalled that BWC would take over Ataka’s role in being the fulcrum on which the quorum question balanced.

Appearing on public broadcaster Bulgarian National Television on February 26, Yonchev said plainly that BWC would not boycott the provision of a quorum for plenary sessions of Parliament.

“The fate of the government will become more clear in the course of European elections. If people give us a mandate, we along with BWC will dismantle this National Assembly and go to elections, and do so immediately.”

Considering the statements by Barekov and Yonchev, it is not clear if they appreciate that BWC has much less leeway that might be imagined after the manoeuvre of acquiring members of the 42nd National Assembly.

From the time of his frequently histrionic performances while still a member of the media, through the well-resourced BWC roadshow that now has been turned into a political party, Barekov has sought to portray himself as an outsider.

While apparently most obsessed by enmity towards Borissov and GERB, Barekov also has been careful also to denounce the BSP and MRF.

But in co-operating with the ruling axis on the quorum issue, Barekov risks being dismissed by many as just a new cog in the status quo.

At the same time, should it be decided that BWC’s MPs should not co-operate in providing a quorum, the BSP and MRF always have the option of seeking a working agreement with Siderov and Ataka, however contemptible his political demands may be.

After all, as even Stanishev has had to acknowledge, there are months of precedent for relying on Ataka for a quorum.

Nor should anyone – including Barekov – fail to learn, as any seasoned observer of Bulgarian politics over the years may point out, that parties that at one moment seem essential and invincible (the Union of Democratic Forces, the National Movement Simeon II, GERB itself for that matter) may at the next be at best on the backfoot, or perhaps destined to be just another footnote in Bulgaria’s political history.

Turkish Stream evaporates into the ether – more economics than estrangement 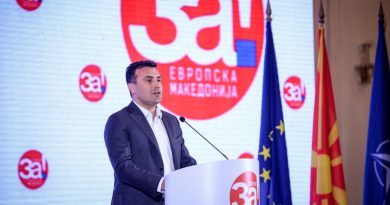