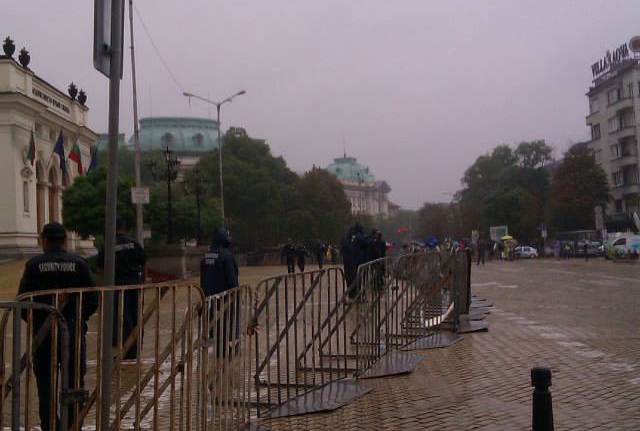 Bulgaria’s anti-government protests, sparked by the controversial appointment of Delyan Peevski as director of the State Agency for National Security, reached the four-week mark on July 12, with yet another rally expected to block traffic in central Sofia later in the evening.

As in the previous two weeks, the morning saw a “coffee-drinking” rally of several hundred gather outside Parliament, despite the overcast sky and light drizzle. However, calls in social media to turn this rally into a day-long blockade of Parliament, on a day when Prime Minister Plamen Oresharski was expected to appear on Question Time, were not heeded.

In recent days, the rallies have occasionally changed their route, but the gathering place remains unchanged – outside the Government building, where chants of “resignation”, “mafia” and “red rubbish” (referring to the socialist party that has nominated Oresharski) mix with loud booing and ear-deafening whistles. Parliament and the Orlov Most intersection are also invariably on the route taken by the protests.

Last weekend, the march continued on Tsarigradsko Chausee Boulevard, with several kilometres of Sofia’s widest boulevard taken by protesters. Right now, it is unclear whether the protest on Sunday, July 14, which will mark the one-month mark since the Peevski appointment, will follow a similar route.

Parliament remains under round-the-clock guard by police officers preventing protesters from crossing beyond the metal barriers erected around the building – such attempts in recent days have been few and mainly as publicity stunts, not a concerted effort to storm Parliament.

Nevertheless on the evening of July, the metal barriers had been removed by protesters, causing police officers to form a tight line in front of Parliament, but no clashes were reported despite a tense atmosphere.

On July 12, Interior Minister Tsvetlin Yovchev joined the chorus of voices in government and Parliament that saw a concerted effort to “manage the protests.”

“In addition to people that are protesting spontaneously and have just demands, there are also people who are trying to use this spontaneous protest, which is not good. I do not think that this is morally correct,” Yovchev said in Parliament. He said that the people who took down the metal barriers outside Parliament on July 11 were part of “a different group”.

But unlike other critics of the protests, some of whom blame former prime minister Boiko Borissov and his party GERB for organising (and even paying for) the anti-government rallies, Yovchev stopped short of pointing fingers, saying that should he at any point have evidence of actions that could be interpreted as criminal, he would pass such evidence to prosecutors.

Also on July 12, Sofia City Hall called on protesters to allow fire-fighting cars and ambulances to pass through unhindered. This comes a day after the prosecutor’s office concluded that the rally on July 10 prevented ambulances from reaching the site of a car crash on Tsarigradsko Chaussee Boulevard in time.

However, the prosecution’s claims were rejected on July 12 by both Health Minister Tanya Andreeva and the head of Sofia Ambulance service Georgi Gelev, who said that the ambulances had arrived at the site within 15 minutes of receiving the first call.

The prosecution’s statement was also derided in social media and online comments, where protest participants said that ambulances were always allowed to pass through the rally unhindered. Some even said that the rallies contributed to quicker response time since the protests’ blockade of major boulevards eliminated rush-hour traffic, making it easier for ambulances to navigate central Sofia.

Drivers have been advised to avoid the Tsar Osvoboditel Boulevard and adjacent streets in Sofia during evening hours, when protesters march from the Government building to the Parliament. Occasionally, some drivers still try their luck, especially in the late hours, when there are fewer protesters on Orlov Most, especially.

On July 11, one such attempt resulted in minor injuries for a protester when his flag was caught by the passing car – reportedly sporting a police sticker on the front glass. Police later said that the driver was not an employee of the Interior Ministry and was taken to a police precinct, bTV reported.

Meanwhile, the counter-protests supporting the Oresharski administration continue gathering each evening at the National Palace of Culture, albeit in smaller numbers than the rallies demanding the Cabinet’s resignation.

On July 12, the list of protest locations expanded to include the Sofia suburb of Bankya, where several dozen people were reported to have gathered outside Borissov’s home to chant “Borissov go to work!”, referring to GERB’s continued boycotting of Parliament sittings.

(Top photo: Police continue their vigil outside Parliament on the morning of July 12 after the end of the “coffee-drinking” protest. Photo: Lora Petrova)