Bulgaria’s Prosecutor’s Office said on July 3 that the former head of the National Intelligence Service, General Kircho Kirov, has been charged with embezzling 4.7 million leva (about 2.4 million euro) over a period of five years.

Sofia military district prosecutors have filed the indictment in the Military Court, which has jurisdiction in this case, the Prosecutor’s Office said in a statement.

The prosecution did not say under which article of the Penal Code Kirov was indicted, but said that if found guilty, he faced a prison sentence between 10 and 20 years, as well as partial or full confiscation of his assets.

According to prosecutors, Kirov diverted the funds from the National Intelligence Service when he was its director in 2007-2011. He had also falsified records, drafting and submitting more than 1100 financial documents for non-existent expenses to cover up the alleged embezzlement, the prosecution’s statement said.

The case was classified and would be tried behind closed doors, prosecutor Elin Alexov was quoted as saying by news website Mediapool.bg. Although Kirov was not the only target of the investigation, he was the only one being charged, Alexov said.

The total evidence against Kirov was collected in 30 volumes, according to Alexov. He also said that financial irregularities at the National Intelligence Service were detected further in the past, but the statute of limitations on such crimes had expired.

Alexov said that the prosecution’s efforts to track the funds were unsuccessful. He said that Kirov refused to offer any explanations and believed himself to be “a victim of the current political climate” in the country, Mediapool.bg reported.

Kirov served as head of the National Intelligence Service between 2003 and 2012, when his term expired. He briefly served as an adviser on security issues to then-prime minister Boiko Borissov, Mediapool.bg said. 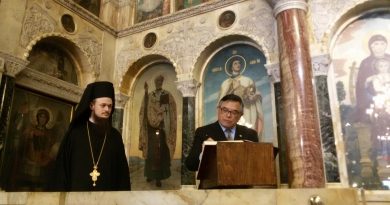