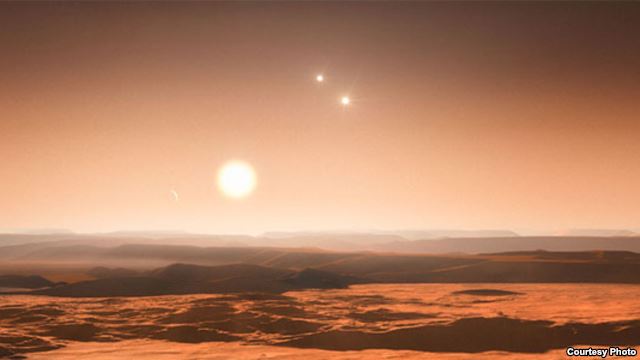 “We knew that the star had three planets from previous studies, so we wanted to see whether there were any more,” says Mikko Tuomi of the University of Hertfordshire, UK in a statement. “By adding some new observations and revisiting existing data we were able to confirm these three and confidently reveal several more. Finding three low-mass planets in the star’s habitable zone is very exciting!”

Gliese 667C, an M-dwarf star, is just over one third the mass of the Sun and is part of a triple star system known as Gliese 667, which is 22 light years away from Earth in the constellation of Scorpius.

The view from one of the newly identified planets would be spectacular. They orbit the fainter of the three stars in the system, and the other two stars would be visible in the daytime. At night, they would provide roughly the light of a full moon.

This is the first time that three such planets have been spotted orbiting in the habitable zone of the same star system. The super-Earths are more massive than Earth, but not as big as Neptune or Uranus.

“The number of potentially habitable planets in our galaxy is much greater if we can expect to find several of them around each low-mass star — instead of looking at 10 stars to look for a single potentially habitable planet, we now know we can look at just one star and find several of them,” adds co-author Rory Barnes of the University of Washington.

The observations were made using a HARPS instrument at European Southern Observatory’s 3.6 meter telescope in Chile. HARPS observes potential planets by detecting the effect their gravity has on the parent star, often causing the star to wobble or twitch.

Source: VOANews.com
(The view from one of the newly identified planets would be spectacular. They orbit the fainter of the three stars in the system, and the other two stars would be visible in the daytime. Credit: ESO)

The Games continue as the rule of law atrophies