Bulgaria has presented new evidence to the European Union implicating Hezbollah in the July 2012 Bourgas bus bombing which killed five Israeli tourists and a Bulgarian bus driver, as it appears that Sofia is ready to join a consensus decision of the European Union blacklisting the Lebanese group, the European Jewish Press reports.

A Bulgarian representative to the European Union said earlier this week that investigators have discovered that a Hezbollah operative was the owner of a printer used to produce fake documents that facilitated the July 19, 2012 bombing of the bus in the Black Sea resort.

“The Bulgarians put new evidence on the table during this meeting,” a diplomat quoted by Reuters said. “Their representative said the printer had been sold to someone from Hezbollah.”

Last February, then Bulgarian Interior Minister Tsvetan Tsvetanov said there was “well-grounded” evidence that Hezbolla, headed by Hassan Nasrallah, was behind the attack. He reportedly added that Bulgarian investigators traced a printer that had produced two forged licenses back to Lebanon, but he did not say the printer was owned by Hezbollah.

But Bulgaria alarmed many of its EU partners when the Foreign Minister Kristian Vigenin, from the new Socialist government, backed away from that stance and questioned whether there was enough proof of Hezbollah’s role.

Since then, however, Bulgaria has decided to change direction again, according to two Western diplomats quoted by Reuters who spoke on condition of anonymity. “It seems that the new government has been testing its limits and has tried to see how far it may go, but once they got a reaction from other EU member states they quickly stepped back,” one diplomat said.

Foreign Minister Vigenin earlier this month stated publicly that the position of Bulgaria is unchanged.

Britain has formally requested the EU to add Hezbollah’s ‘’military wing’’ to the list of terrorist groups. Britain and France backed the move but several other countries – including Austria, Italy, Ireland – reportedly continue to block efforts to secure the blacklisting out of fear that the it would further fuel tensions in the Middle East.

The decision would require unanimity among the EU’s 27 member states.

Blacklisting Hezbollah would freeze its assets in Europe and prevent it from raising funds there. In the EU, only Netherlands has outlawed the Lebanese group while Britain did the same with the group’s military wing.

In a statement sent to Reuters last Wednesday, the Bulgarian foreign ministry said: “Bulgaria is ready to join a consensus decision of the European Union. The responsibility to present a solid foundation for it is a collective one.”

The Socialist government, while broadly pro-Western, is traditionally sympathetic towards Russia, and this could have played a part, said a former official with the previous, center-right government.

Israel hopes that the European countries who are still reluctant to designate Hezbollah as a terrorist organization change their mind, Israeli Prime Minister Benjamin Netanyahu said Thursday before a meeting with EU foreign policy chief Catherine Ashton in Jerusalem.

Speaking at a press conference, he  said it “would be the right thing to do.”

A bipartisan group of members of the US Congress from both parties have called on the European Union to designate Hezbollah as a terrorist organization, congratulating the EU on the formal process to blacklist the Iranian-backed group.

Discussing the call, Republican Doug Lamborn from Connecticut emphasized that inaction emboldened Hezbollah, which has “killed more Americans than any other organization after al-Qaeda.” 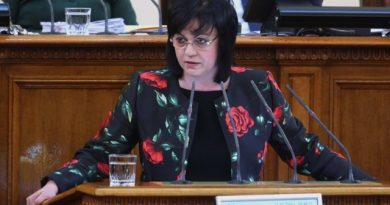