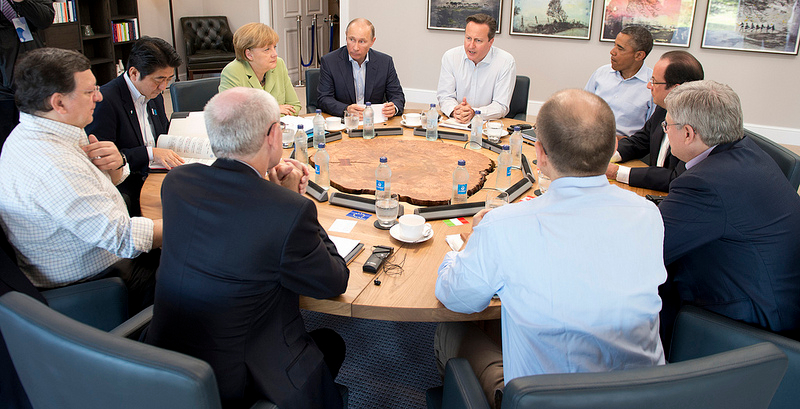 Vladimir Putin got out of the G-8 summit in Northern Ireland without any broken china on the floor.

In the lead up, Syria’s civil war loomed like a polarizing issue capable of turning the meeting into seven against one. But Putin checked his aggressive instincts. The Russian leader knew he will host the next G-8, in Sochi, Russia, in June 2014.

Now that Putin no longer has to try to smile for Western cameras, he can revert to form – threatening to send to Syria ship-killing and aircraft-killing missiles, and then complaining about “western interference.”

Now Putin is free to revert to the old Soviet foreign policy role of playing the spoiler. (UK Prime Minister David Cameron reminded Putin that Britain also has a veto vote in the UN – something most people forget because the British don’t revel in obstructionism).

Putin, a child of the Soviet 1960s, seems to live by the old Soviet drinking toast: “Let them be afraid of us.”

The Kremlin is back to the old zero sum game of the Soviets: West up, Moscow down; Moscow up, West down.

But, this time, in the case of Syria, the Kremlin might take a step back and look at the big picture.

Like it or not, the Muslim world is re-dividing along the old Sunni-Shiite schism.

Egypt’s decision to break off ties with Syria on Saturday lays bare a Sunni alliance that unites such diverse countries as Egypt and Saudi Arabia.

On the other side, there is the Shia alliance stretching from Iran, through Shia-influenced Iraq to Syria and to Lebanon’s Hezbollah, on the Mediterranean. Despite all the smoke and mirrors in Moscow, Russia has now joined that alliance.

Well, there is an inconvenient fact Moscow strategists feel they can ignore: 15 percent of Russia’s 144 million people are Muslim. And 95 percent of those are Sunni. Because of draft dodging by Russia’s urban middle class, Russia’s army now is now 20 percent Muslim, according to a government survey last February. By the end of this decade, Muslims are expected to account for 20 percent of Russia’s overall population.

From the point of view of many Russian Muslims, the Kremlin has placed itself on the wrong side of the Sunni-Shia divide.

But Moscow foreign policy makers have a long history of ignoring domestic “constituencies.”

Of course, since a dozen big energy and mining companies account for more than half of the budget revenues of the Russian Federation, it is easy to overlook the millions of little people.

Russian law recognizes Orthodox Christianity, Islam, Buddhism and Judaism as the nation’s four historic religions. But after that perfunctory nod, the official attitude toward Islam is often one of denial.

Moscow has four mosques and an estimated Muslim population of 2 million people. Do the math.

When the Islamic fast of Ramadan ends in August, there will be tens of thousands of men praying in streets around the mosques. Applications to build mosques in Moscow are routinely denied. The argument usually runs that half of Moscow’s Muslims are guest workers, from Central Asia or Russia’s Caucasus. They will eventually go home.

In this environment, the leadership in Moscow can blithely ignore the sentiments of Russia’s Sunni millions and treat Syria’s civil war as a geostrategic power game. Something like the board game of Risk, except for the 93,000 dead.

But things get delicate down in Russia’s overwhelmingly Muslim Caucasus.

On Saturday, Ramzan Kadyrov, the Kremlin ally who runs Chechnya, ordered Chechen officials and clerics to “constantly educate the youth about the real nature of Syrian events, to prevent possible recruitment of young people for participation in the war.”

He said that “five or six” Chechens have been killed fighting in the ranks of Syria’s Sunni opposition. Russian security officials estimate that about 200 Russians are fighting with the Syrian rebels. The fear is that one day they will bring their fighting skills back to Russia.

Although Russians and the outside world pay little heed, a slow motion war is burning in Russia’s Muslim majority borderlands. Last year, this violence created 1,225 civilian and military casualties – 700 killed and 525 wounded. By contrast, 310 American soldiers were killed last year in Afghanistan – a nation with six times the population and six times the territory of Russia’s southern Caucasus.

The causes of Russia’s violence are varied and deep.

But one step toward reconciliation might involve adjusting the Kremlin’s foreign policy to take into account the world views of a sizable minority of Russia’s population.

Why do you think that every American President since George H.W. Bush has visited Africa? Could it have anything to do with the fact that African Americans account for 14 percent of the U.S. population? Think about that next week when President Obama flies to Africa for a five-day trip to Senegal, South Africa and Tanzania.

US urges citizens abroad to be ready for attacks 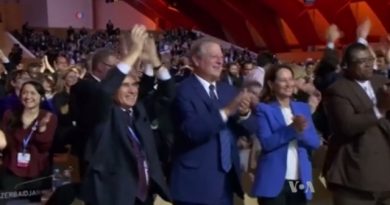