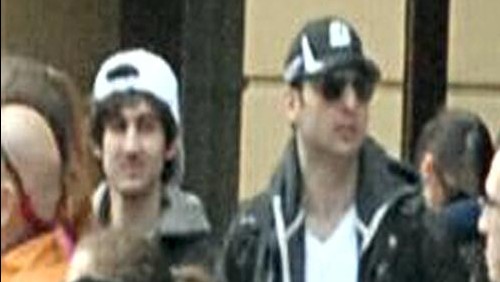 Police in Massachusetts say one of the suspects in the Boston Marathon bombing is dead and the other remains large, as security officers continue a massive manhunt the Boston suburbs.

Boston Police Commissioner Edward Davis tweeted Friday that the “white hat” suspect from the marathon bombings, known as Suspect 2, is still at large. Police are warning residents of Watertown, Massachusetts to stay inside their homes and refrain from answering the door to anyone but a police officer.

Late Thursday, police responded to the fatal shooting of an officer on the campus of Massachusetts Institute of Technology. The shooting incident was followed by a carjacking that led police to the nearby suburb of Watertown. Police have since confirmed that their suspects in the MIT shooting were also those suspected in Monday’s marathon bombing.

Early Friday, police, FBI personnel, and bomb squads converged with flashing lights and blaring sirens on Watertown, where a helicopter circled overhead and some residents reported hearing gunshots and explosives. One resident told VOA’s Carolyn Presutti that the activity had been going on for several hours.

State police spokesman David Procopio confirmed that at least one suspect tried to use explosives against police officers.

Photos, video released On Thursday, the FBI released photographs and videotape of the two suspects in the Boston Marathon bombing. One suspect was wearing a white baseball cap turned backwards. The other was wearing a black cap. Both are carrying backpacks.Monday’s twin bombings near the finish of the  Boston Marathon killed three people, including an 8-year-old boy and a Chinese-born graduate student. More than 170 people were injured. Some of them lost their legs.
Source: VOANews.com