Bulgarian Socialist Party leader Sergei Stanishev has captured headlines in the local media by imposing a “changing of the guard” strategy to produce lists of candidate MPs notably different from the party’s previous line-up in the National Assembly, dumping some of the BSP’s best-known veteran politicians along the way.

This has emerged as Boiko Borissov’s centre-right GERB party finalises its lists and also appears set for some changes, with campaign headquarters chief Tsvetan Tsvetanov saying that only about 40 per cent of the names of those who were in the cabinet in February 2013 would be on the candidates list.

Elsewhere, lesser parties are caught up in internal dynamics about who their candidates will be.

To the prospect of significant established parties seeking to generate excitement about themselves by claiming to be in pace with the times by offering changes of faces, it also may be added that the “protesters party”, the Bulgarian Civic Initiative, will get seats – one forecast is of up to 15 per cent – meaning that the membership of the 42nd National Assembly will be noticeably different from that of the 41st.

Apart from those BSP MPs from the now-dissolved parliament who have announced their retirement, names excluded from the socialists’ candidate list for the May 12 2013 elections include former economy and energy minister Roumen Ovcharov, former interior minister Roumen Petkov and former labour and social policy minister Emiliya Maslarova.

Ovcharov told local media that he did not much value on pushing buttons in parliament. He said that the word “renewal” regarding the lists was not accurate because in many areas there were “old people”.

In a telling comment, he said that Stanishev had taken on a heavy responsbility as never before in presenting and defending the lists on his own. “This creates a basis for attacks after the elections,”Ovcharov said.

Stanishev, who also said that 20 per cent of the socialist party’s candidates would be women, said that some of the “new faces” were “proven names”. Overall, the candidate lists were a 50-50 split between “old” and “new”faces.

Stanishev, along with a few others, appear in more than one list, including Sofia, which would mean a straight fight on the ballot with Borissov should the GERB list also show the former prime minister contesting the city of which he was mayor before becoming head of government in 2009. Bulgarian-language media noted that Stanishev made no comment on accepting personal responsbility should he lose in this (still hypothetical) head-to-head contest with Borissov.

The BSP is to stand in the May 12 parliamentary elections under the Coalition for Bulgaria banner, which also includes – and means a share of seats for – the Movement for Social Humanism, Alexander Paunov’s Communist Party of Bulgaria, Georgi Atanasov’s Social Democrats, Euroroma, New Dawn and an agrarian party.

As to GERB, Tsvetanov told a news conference on March 27 2013 that Borissov would be the ticket leader in two places and so would he, one likely being Veliko Turnovo. Tsvetanov said that former cabinet ministers likely to be on the top of candidate lists included Delyan Dobrev, Ivailo Moskovski, Liliyana Pavlova, Tomislav Donchev and former deputy minister Vladislav Goranov.

In the town of Sliven, the former regional co-ordinator of the movement, Georgi Balabanov, was suspended after a dispute about the fact that he had wanted to head the local election list but had lost out to top party members from Sofia.

“The party of Meglena Kouneva has become Bulgaria’s movement for obedient citizens,” said Balabanov, who said that the party’s promises of a bottom-up instead of top-down approach had turned out to be false. “We apologise to everyone who was misled,” he said.

Media reports said that there were similar tensions in Bourgas, Stara Zagora, Pernik, Smolyan, Plovdiv and Pazardzhik, where the national leadership was “imposing” list leaders and local co-ordinators were being assigned lesser places.

Kouneva’s party, meanwhile, said on March 27 that it was approaching prosecutors because of its suspicion that it was being wiretapped. 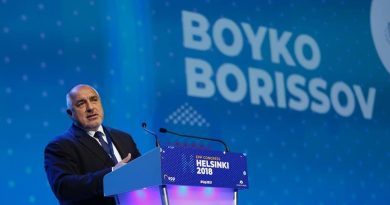