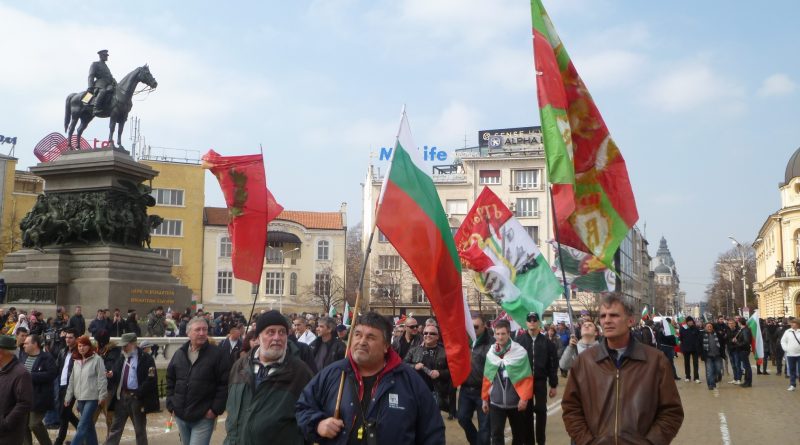 They are the force that brought down a government and precipitated early elections; the force that captivated the international media with apocalyptic (if apocryphal) accounts of daily bloody clashes on the streets; and yet, amid the petty melodramas of just another Sunday, Bulgaria’s protesters appeared riven by factionalism, petty and divided.

Some want to found political movements to contest the ahead-of-term elections on May 12 and others do not; others to pursue radical alternatives and others not; most favour demands that would be as suicidal in implementation as the latest individual to self-immolate; and all, as ever, are captive to individual grudges, genuine grievances, and vulnerable to allegations that they serve interests other than the long-term interests of Bulgaria.

In contrast to the thousands mustered in previous weeks, the first turnout of protesters on the first weekend after the swearing-in of the Marin Raykov caretaker government, ahead of the ahead-of-term elections, was paltry.

As reported by local news agency Focus, the protesters who turned out on March 17 “split from the very beginning”.

“Some of the people who were very active in the protests a month ago were now booed and unwanted,” the local news agency said.

“The biggest discontent was caused by suspicions that political parties are trying to incorporate insiders among the protestors in order to take advantage of them. Significantly fewer people attended today’s protests in comparison with previous ones. In some towns there were only dozens of people. In parallel to the street demonstrations, in many towns and cities citizens set up movements, with some of them saying they express the protestors’ interests and will represent them in the upcoming early parliamentary elections on May 12.”

In Bulgaria’s capital city Sofia, the protest on March 17 was supposed to start in several venues, but as no one turned up, the protest outside the National Palace of Culture did not take place.

At the intersection at Eagle Bridge, about 50 people gathered, and in front of the building of the Ministry of Economy, Energy and Tourism, about 100.

The protest in Sofia split into two at the very beginning. Some of those who had gathered in front of the Ministry of Economy, Energy and Tourism, headed to the National Theatre. The reason for the split was that the protest was organised by two different movements.

The protestors voiced their discontent with the reaction of Parliament, the State Energy and Water Regulatory Commission, Municipality of Sofia and the President’s Office. They also insisted on re-launching units 3 and 4 of Kozloduy nuclear power plant and nationalising the power distribution companies. They expressed their disagreement with the privatisation of the Bulgarian State Railways (BDZ) and VMZ Sopot. While passing by some of the co-ordinators of today’s protests, some protestors chanted “traitors” and “mafia.” The civil association Deliverance was condemned as traitors.

In the northern city of Rousse, Bulgarians protesting against monopolies said that they would set up a tent camp, just like some of the protestors in Sofia.

In the city of Varna and town of Shoumen, trains were blocked at the railway stations.

Dozens of people protested in the city of Varna. They blocked boulevards and there was tension with the police. They hung an effigy in front of a bank in the city. At the railway station in Varna, protesters blocked a train to Sofia from departing. Protesters also turned out in front of the office of the power distribution company.

In Bulgaria’s second biggest city, Plovdiv, about 200 people joined the March 17 protest. The demonstrators started a protest procession, which was accompanied by three police patrols.

The local women’s handball team was in the front line of the procession. The protesters held photos of Bulgarian politicians, on which there was an inscription saying “Let us clean up Bulgaria”.

In the town of Veliko Turnovo, the theme of the protest was “Levski, get up and lead us” [referring to Bulgarian revolutionary Vasil Levski]. About 50 people arrived at the gathering point of the protest.

In the Southwest town of Blagoevgrad, the protest ended peacefully, but with the protesters splitting into two groups, with differing leaders and demands.

In the southern town of Sliven, the protestors gave the new government one week to fulfill their demands. The protests in the town will continue with new demands, such as a lower water price, said the protestors.

In the western town of Kyustendil, about 100 people gathered in the square to stage their latest protest against monopolies and the country’s poor government.

Mayor Petar Paunov was again among the protestors. The chairwoman of the co-ordinating committee, Elena Mancheva, told the protestors that the protests should continue and that anyone who was dissatisfied should take to the streets and not stay at home.

(Archive photo of protests in Sofia on March 3 2013: Clive Leviev-Sawyer)