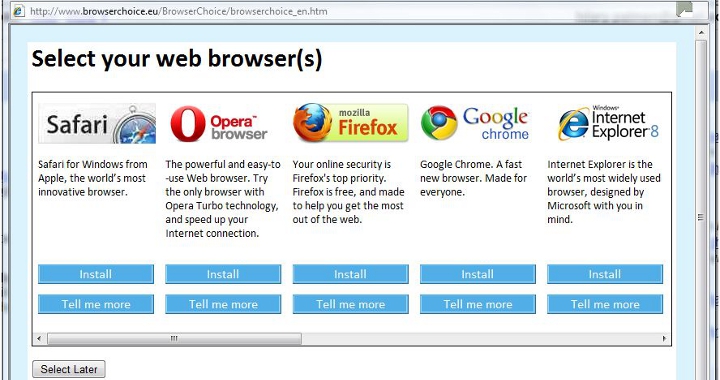 The European Commission said on March 6 that it imposed a 561 million euro fine on Microsoft for failing to offer Windows users the browser choice screen that allows users to pick a web browser, rather than use Microsoft’s Internet Explorer browser by default.

Microsoft was required to do so for a period of five years by the terms of its antitrust settlement with the Commission in 2009. However, the company failed to include the browser choice screen when it rolled out Windows 7 Service Pack 1.

As a consequence, an estimated 15.3 million Windows users in Europe were not shown the screen over a period of 14 months – between May 2011 and July 2012 – the EC said.

“In 2009, we closed our investigation about a suspected abuse of dominant position by Microsoft due to the tying of Internet Explorer to Windows by accepting commitments offered by the company […] A failure to comply is a very serious infringement that must be sanctioned accordingly,” EC vice president in charge of competition policy, Joaquin Almunia, said in a statement.

“Following an in-depth investigation and taking into account Microsoft´s reply to our objections, today’s decision finds that Microsoft has indeed breached its legally binding commitments,” he said.

Nevertheless, the US software manufacturer got off relatively easy, considering that the EU could have levied a fine of up to 10 per cent of the company’s global turnover in the preceding business year, in which case the fine would have been close to $7.9 billion.

“In setting the level of the fine, the Commission took into account the gravity and the duration of the infringement as well as the need to ensure that the sanction is sufficiently deterrent,” Almunia said. “At the same time, once the breach was discovered, Microsoft cooperated with the Commission and provided information which helped the Commission to investigate the matter efficiently. This was taken into account as a mitigating circumstance.”

The latest sanction takes the total amount of fines imposed by the EU on Microsoft over the past decade to about 2.2 billion euro. Before its investigation into web browser bundling, the EC also fined Microsoft 497 million euro in 2004 for shipping Windows with the Windows Media Player software, followed by an additional 280 million euro for failing to disclose certain source code specifications, as required by the EU.

In 2007, the company was fined a further 899 million euro (reduced to 860 million euro on appeal) for failing to comply with the 2004 decision, the highest anti-trust fine imposed by the EU at that time.

Unemployment in Bulgaria was 6% in May 2017, again below EU average – Eurostat