Volen Siderov, leader of Bulgaria’s ultra-nationalist Ataka minority party, appears determined to carve himself a place in the public eye with a strategy involving stunts in which he walks out of some meetings and tries to get into others – especially when he is not wanted.

A long time has passed since Siderov owned the constituency of the angry, embittered and disillusioned among Bulgaria’s electorate. In 2005 and 2009, this won his party seats in Parliament, on a platform of extreme nationalism from a leader whose writings and statements have led to allegations against him that he is xenophobic, anti-Muslim, anti-Semitic and intolerant in general.

Siderov’s peak came in 2006 when he reached the runoff of that year’s presidential election, against socialist Georgi Purvanov – a fact that was, admittedly, aided by the lacklustre candidates fielded by a range of centrist and right-wing parties. At the second round, centre-right voters held their noses to vote for Purvanov to forestall Siderov from becoming Bulgaria’s head of state.

In the years since then, Siderov’s party has been in decline. It ended its first term in Parliament without the numbers required for an official parliamentary group, after a series of defections. Returning in July 2009, Ataka was fractured by more infighting, most notably when a party led by Siderov’s stepson was formed after the collapse of Siderov’s marriage.

Media reports of Siderov’s alleged taste for luxury hotels and expensive drinks – all denied by Siderov – damaged the image that he sought for himself as the champion of those hard-pressed and alienated from Bulgaria’s elites.

In the case of the early 2013 nationwide protests, the issue that was the catalyst was one on which Ataka had campaigned for months, but with few taking any notice – electricity bills and the expulsion from Bulgaria of foreign-owned electricity distribution companies.

It may have been Siderov’s campaign originally, but it took on a life of its own as, through social networks and other forms of stimulation, the electricity protest campaign grew into an overall national expression of bitter resentment against the difficult cost of living in Bulgaria and an even more bitter resentment of established political parties.

The train left the station without Siderov, and he has been trying desperately to get back on board.

When President Rossen Plevneliev announced consultations with all political parties on the way forward after the resignation of the Borissov government, Siderov made a show of demanding that the consultations be open to protesters and broadcast live. It was a pointed rejection of Plevneliev having said that he would meet all parties simultaneously to avoid any suggestion of dark deals. Siderov deployed boycott politics, as he did again when the Consultative Council on National Security met on February 26.

The council, which includes all senior state office-bearers, all leaders of political parties represented in Parliament, key cabinet ministers and security and intelligence chiefs, had been convened by Plevneliev to discuss the risks to the country after the Borissov government resignation.

Siderov turned up, but again made a show of saying that proceedings should be open and that the media should be allowed to be present throughout, not just to hear Plevneliev’s opening remarks and take a few happy snaps of those assembled around the long table in 2 Dondoukov Boulevard. With some patience, Plevneliev sought to explain to Siderov that the constitution governed the fact that meetings of the council are closed.

(Plevneliev, elected on the GERB ticket, has made the running of the Consultative Council on a somewhat more organised, efficient basis, including with agreed procedural rules and agendas and documents available in advance, something of a point of pride. But then, Siderov, determinedly forever the angry man, has dismissed Plevneliev as a “marionette” of the ruling party).

In contrast, on February 27, he tried to walk in – to a scheduled meeting of the Cabinet. Perhaps, in the days when his party was an informal ally of Borissov before they became estranged over a number of issues, including the uproar involving Ataka outside a Sofia mosque, Siderov might even had a prospect of a role in government. But he does not now.

Ataka said that it wanted its representatives in on the Cabinet meeting, citing in particular the Pirin national park issue, saying that it wanted to prevent the alienation of Bulgaria’s natural assets. Siderov told reporters that there was no bar to members of Parliament attending a meeting of the Cabinet.

The February 27 stunt, however, largely fell through because the Cabinet meeting was postponed because of Borissov’s blood pressure problems which had landed him in hospital.

But no doubt Siderov would be back at the appointed hour. Elections are now expected to be on May 12, which does not leave Siderov much time to claw for media and public attention, especially given that before the political crisis, opinion polls gave Ataka scant chance of a return to Parliament. Now, like so much else, the game has changed, and Siderov is determined to play it with every manoeuvre he can. 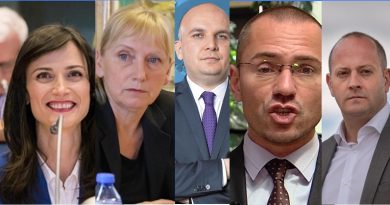