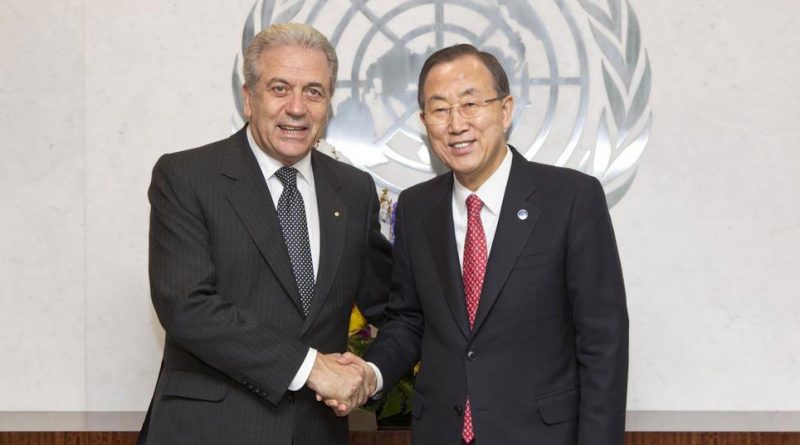 United Nations Secretary-General Ban Ki-moon and Greece’s foreign minister, Dimitris Avramopoulos, discussed prospects for a settlement in Cyprus, as well as resolving the Macedonia name dispute, during a February 21 2013 in New York.

The United Nations has been facilitating talks between the Greek Cypriots and Turkish Cypriots with the goal of reunifying the divided Mediterranean island nation. The talks are aimed at the eventual establishment of a federal government with a single international personality, consisting of a Turkish Cypriot Constituent State and a Greek Cypriot Constituent State, each of equal status, the UN News Centre said.

The UN has also been mediating talks between Athens and Skopje in the dispute over the latter’s name, through the efforts of the Secretary-General’s personal envoy, Matthew Nimetz.

The talks are in line with a UN-brokered interim accord reached in 1995 which details the differences between the two over the use of the name Macedonia, and obliges both Athens and Skopje to continue negotiations under the auspices of the Secretary-General to try to reach an agreement.

At the February 21 meeting, Ban underlined the importance of accelerating progress in both processes and reiterated his personal commitment to that end, according to information provided by his spokesperson.