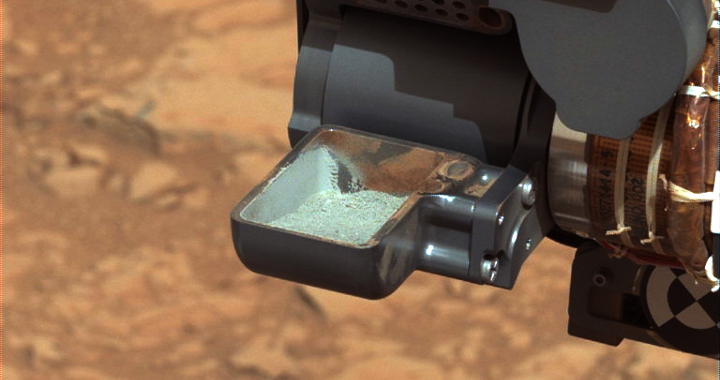 The U.S. space agency confirmed Wednesday that the Mars rover Curiosity has collected the first sample from inside a rock on Mars. NASA engineers received images from Mars Wednesday showing the powdered-rock sample in the rover’s scoop.

Seeing gray on the Red Planet
The Mars rover Curiosity has successfully bored into and collected the innards of a rock on the Red Planet, yielding about a tablespoon of gray powder that the rover will soon analyze.

Joel Hurowitz of NASA’s Jet Propulsion Laboratory in California told reporters the sample is not the red color typically associated with the Martian surface.

“It’s pretty exciting to us that you just sort of brush beneath this surface veneer, and the rocks are a completely different color,” said Hurowitz. “We’re sort of seeing a new coloration for Mars here, and it’s an exciting one to us.”

Unlocking a time capsule
Louise Jandura, the sample system chief engineer for Curiosity, has been working on the project for nearly eight years. During the NASA teleconference, she described Curiosity’s achievements as historic for the mission, the space program and the United States.

The Mars rovers Spirit and Opportunity were outfitted with tools to grind the surface of rocks, but Jandura emphasized that Curiosity’s drill is a significant advancement.

“It allows us to go beyond the surface layer of the rock, unlocking a kind of time capsule of evidence about the state of Mars, going back three or four billion years,” she said.

Mission on Mars
The sample comes from a fine-grained, veiny sedimentary rock that was chosen because it may hold evidence of wet environmental conditions long ago.

In the coming days, Curiosity will sieve the powdered rock sample and deliver portions to the rover’s scientific instruments.

Curiosity landed on Mars in August on a mission to investigate whether the planet ever offered an environment that could have supported microbial life.