Witnesses whose identities may not be disclosed have given evidence of alleged hate speech against Christians, Jews and non-Muslims by one of the accused in the trial of 13 Muslims, which resumed on November 28 2012 in the Bulgarian city of Pazardzhik.

As has become customary, the court building was ringed by tight security and there were rival protests outside, one by members of the Muslim community against the trial, the other by a small group of ultranationalists.

The court released a transcript of evidence by a witness identified only by the number “005”, who had told the court that he lived in a residential area with a mixed population and which over the past 10 years had gone from communities living in harmony to a heightening of tensions, allegedly because of the preaching of imam Ahmed Ahmed.

Further allegations by the witness were that Ahmed and his supporters wanted Bulgaria and all the world to become Islamic, that electoral democracy should be abandoned in favour of a Muslim theocracy, and that Ahmed’s supporters had assaulted Christians before Easter.

The witness said that Ahmed had property and wealth out of proportion to the fact that he had no job.

The accused in the trial, 12 men and a woman, have denied all allegations in the various charge against them, which include membership of an unlawful religious organisation and of seeking the overthrow of a democratic state in Bulgaria and of propagating religious and ethnic hatred.

Witness number 005 was one of three protected witnesses who were scheduled to give evidence on November 28.

Ahmed rejected all the allegations made by the protected witness, saying that he had no hit squad, that Muslims do not venerate people who cut off heads, did not support suicide bombings and during religious services, worshipped only Allah.

Local media quoted nationalist VMRO leader Krassimir Karakachanov as saying outside the court building that their protest was to show that in Bulgaria, there was intolerance of radicalism. He said that the prosecution was not against Muslims but of people who preached radical Islam. “Bulgaria is a secular country, and no one can change this constitutional order,” he said. 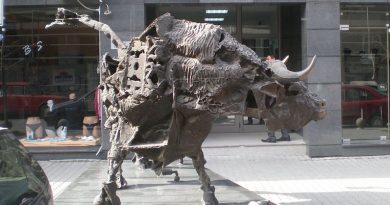