The leadership of the Bulgarian Orthodox Church has seven days from November 6, the date of the death Patriarch Maxim, to choose a temporary head, while until then the acting head will be Veliko Turnovo Metropolitan Grigorii, a senior member of the Holy Synod.

Illustrating a theme likely to be among several pre-eminent factors in the debate on choosing a new head of Bulgaria’s predominant Christian church, Grigorii is among those who was disclosed by the Dossier Commission in 2011 to have been an agent for the communist-era State Security secret service.

Grigorii, born in October 1950, was recruited at the age of 25, becoming an agent with the code-name Vanyo. Among the leadership of the Bulgarian Orthodox Church, however, he was hardly alone in having worked for the Bulgarian communist state’s spy service – so did the majority of those who were members of the Holy Synod and whose identities were disclosed by the Dossier Commission in 2011.

Maxim, who died of heart failure on November 6 after 41 years at the head of the church, was the subject of praise from senior clergy in the hours after his death, for his faith, calm leadership and unifying role.

Yet in the final months of his life, the months that followed the Dossier Commission disclosures, the church hardly managed a coherent policy response to the fact that most in its most senior ranks had worked for the communist atheist state. Perhaps not that surprising given that such a policy statement would have to be agreed on by a body dominated precisely by people who had worked for State Security.

In the first hours after Maxim’s death, as bells tolled at Alexander Nevsky cathedral, a book of condolences was opened for the public at the Holy Synod, the first state VIPs began to state their condolences and requiems were held in various Bulgarian cities and towns, those church leaders who were present and prepared to speak to journalists were reluctant to speak about who would succeed Maxim.

Those who hold the acting leadership in the coming days and months will have several formal duties, including formal notifications to state and church leaders, including elsewhere in the Orthodox Christian world, where Maxim was one of the longest-serving leaders.

Bulgarian-language media reports of comments from various Bulgarian church leaders had a common thread in appeals for the next Patriarch to be one who could achieve and maintain unity in the church.

It is expected that the election of the next Patriarch, carried out by a number of clergy and a small number of lay representatives, will take place by March 2013. Candidates must be aged at least 50, must have been metropolitans for at least five years and should have several other qualities listed in church statutes on the topic.

From abroad, the Russian Orthodox Church led the field among foreign churches in offering condolences on the death of Maxim, who in recent months hosted a visit by Russian Patriarch Kirill. 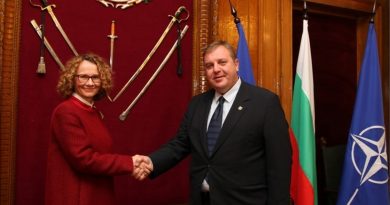