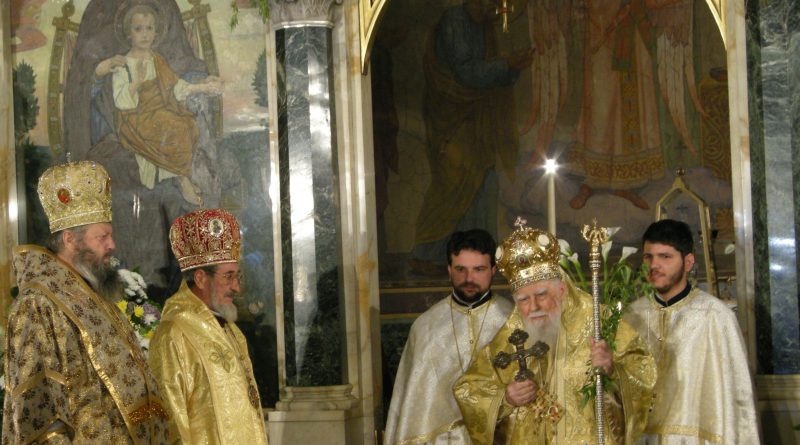 Patriarch Maxim, the head of the Bulgarian Orthodox Church since 1971, died in the early hours of November 6 2012 at the age of 98.

The church’s leadership, the Holy Synod, was due to meet to choose a temporary head of the church.

Maxim was born as Marin Naidenov Minkov on October 29 1914 in the village of Oreshak in the Troyan municipality, district of Lovech.

In July 2011, when the 40th anniversary of Maxim’s enthronement was celebrated at a special liturgy at Sofia’s landmark Alexander Nevsky Cathedral, the Holy Synod said that Maxim hadbeen a skilled leader of the Bulgarian church and had succeeded in preserving its unity and identity. His efforts had earned him the love and respect of not only Bulgarian clergymen and ordinary people but also of the entire Orthodox world, the Holy Synod said at the time, Only history would be able to show whether his efforts were successful but whatever its judgment may be, Patriarch Maxim will remain in the memory of generations as a good  chief shepherd of faithful Bulgarians, the Synod said.He became a novice at Troyan Monastery at an early age, completed theological training at Sofia seminary and Sofia University, and took orders as a monk in 1941. He rose through church ranks to become Patriarch of the Bulgarian Orthodox Church and Metropolitan of Sofia on July 4 1971.

Unlike a large number of Bulgarian Orthodox Church senior leaders, Maxim was not identified by the Dossier Commission as an agent or collaborator with communist-era State Security.

His recent hospitalisation prevented him attending celebrations of his 98th birthday on October 29.

As tributes began to pour in to the late Patriarch Maxim, informed observers of the church remembered him as a moderating influence who was able to maintain a balance among various factions within the church.

He guided the Bulgarian Orthodox Church through some of its most difficult times, including the final years of communist rule in Bulgaria, the transition towards democracy, the years that the church establishment was challenged by an “Alternative Synod” and the exposure of former communist State Security people in the Holy Synod, the last-mentioned an episode that precipitated a loss of public confidence in the church.

In 2004, when he turned 90, Maxim was awarded Bulgaria’s highest honour, the Stara Planina first class, by then-president Georgi Purvanov for the Patriarch’s wise management of the church.