Bulgarian border police arrested a total of 14 would-be illegal immigrants in the space of 24 hours on September 22 2012, the latest in a series of arrests in more than a month, mainly of people from Syria and other Middle Eastern or Asian states.

Most of the arrests took place along Bulgaria’s border with Turkey.

In one incident, border police stopped a camper van in which two Polish citizens, aged 38 and 36 years, were travelling. Inside the vehicle, 10 people, none with identification documents but reported to be Pakistani nationals, were found.

Earlier the same day, at the Kapitan Andreevo checkpoint, a search of a truck driven by a Turkish citizen found four youths, aged from 14 to 17, believed to be Syrian nationals. The four had been hidden in two boxes insulated with aluminium foil in an attempt to evade detection during x-ray examination of the vehicle.

Two days earlier, border police from the Elhovo checkpoint arrested nine men near thevillageofGolyam Derventwho had crossed the Turkish-Bulgarian border illegally. Eight of the group had no identification documents but said that they were Syrian citizens. The ninth was a Bulgarian-Turkish dual citizen escorting the group.

At the end of August, Bulgarian anti-organised crime squad members, working in co-operation with police from Yambol, Turgovishte and Kurdjali arrested a three-member group on various charges including human trafficking, illegal transferring of people from third countries across the border, and document forgery. Police confiscated blank university degree forms and fake identity documents.

On August 28, a search of a bus in which – it seemed – only two co-drivers and a cabin stewardess were travelling. A search of the bus found two men concealed in the front of the bus. It was established that both were Chinese citizens. 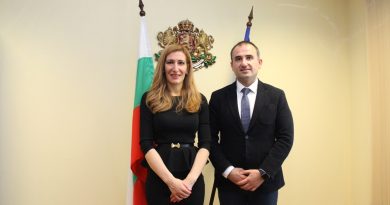 Plan for tourist route of Jewish landmarks in Bulgaria