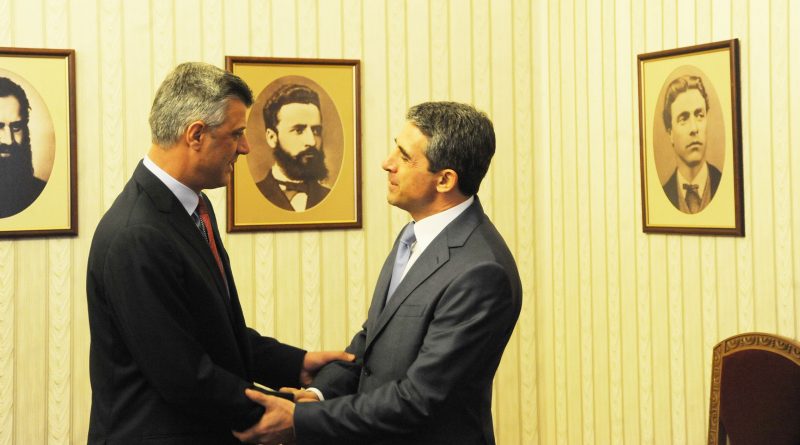 Kosovo prime minister Hashim Thaçi is visiting Bulgaria with a message of optimism about his country’s European future, undeterred by the Tomislav Nikolić victory in Serbian president elections and the choice of Serbia’s Vuk Jeremić as UN General Assembly president, and is urging Bulgarian businesses to invest in Kosovo.

Plevneliev said that Kosovo’s future was as a “worthy member” of the European Union and Nato.

Bulgaria would continue to support efforts to fulfil the European and Euro-Atlantic prospects of the countries of the Western Balkans, Plevneliev said. He emphasised Bulgaria’s readiness to share its experience in the process of European integration.

During the meeting, Plevneliev said that the building of a stable and independent Kosovo would contribute to regional security and prosperity in the Balkans.

Thaçi said that bilateral co-operation between Bulgaria and Kosovo was very good, but both sides could achieve more in the fields of economy and education. He invited Bulgarian companies to invest in Kosovo’s energy and mining industries.

According to a media statement by the Kosovo prime minister’s office, Thaçi spoke in favour of strengthening regional co-operation as one of the most essential preconditions for strengthening peace, stability and good neighbourliness and that European values ​​that should be cultivated by all countries of the region.

Bulgaria was among the first countries to recognise Kosovo, which unilaterally declared independence in February 2008, a move adamantly rejected by Serbia.Belgrade is backed by, among others, UN Security Council members Russia and China in this rejection, but so far Kosovo has won recognition from 91 countries.

The same day, European Council President Herman van Rompuy said that further normalisation of Serbia’s relations with Kosovo “remains a key requirement for the next step, the start of accession negotiations”

“We expect Belgrade to implement the agreements it has entered into in the dialogue with Priština, in particular on regional co-operation and crossing points. Furthermore, we need to find a solution to the volatile situation in northern Kosovo in the interest of all people living there,” Van Rompuy said.

Thaçi, in an interview with public broadcaster Bulgarian National Television’s (BNT) Светът е 7 (The World’s Seven Continents) weekly programme to be broadcast on June 22 2012, said that Kosovo was in the process of consolidating and strengthening its certain path to integration in the EU and Nato.

He said that in 2011, Kosovo’s economic growth was five per cent, and this was based on good governance and the rule of law, but also the fight against negative phenomena. “Naturally, we will do more to fight corruption and organised crime,” Thaçi said.

Asked how the recurring tensions in northern Kosovo – which has an ethnic Serb majority – could be resolved, he said that Kosovo was a sovereign country with territorial integrity recognised internationally.

Thaçi, asked what he would do if the choice was between resumed conflict and the partition of Kosovo, said, “Kosovo will not be divided. Any attempt to change the borders of Kosovo would be a dangerous thing and is unacceptable”.

“We achieved seven agreements in the dialogue led by the EU in Brussels. We expect to implement them, and thereafter to continue with the dialogue on technical questions,” Thaçi said.

“We expect in the near future to have international relations – Kosovo to have an embassy in Belgrade and as well, Serbia an embassy in Priština.”

Thaçi, asked how he expected the process of the international recognition of Kosovo to develop with Jeremić presiding over the UN General Assembly in 2013 and with Serbia’s OSCE chairmanship to follow, said that recognition of the independence of Kosovo by other countries would continue.

“Kosovo will be a member of the UN, and after that will be part of other international organisations. Kosovo is proceeding firmly on its European path,” Thaçi said.

European Commissioner for Home Affairs Cecilia Malmström handed the roadmap for visa liberalisation over to the Kosovo government on June 14 2012.

“We are proceeding on the path of democratic reforms, which will accelerate the inclusion of Kosovo in the European family,” Thaçi told BNT.