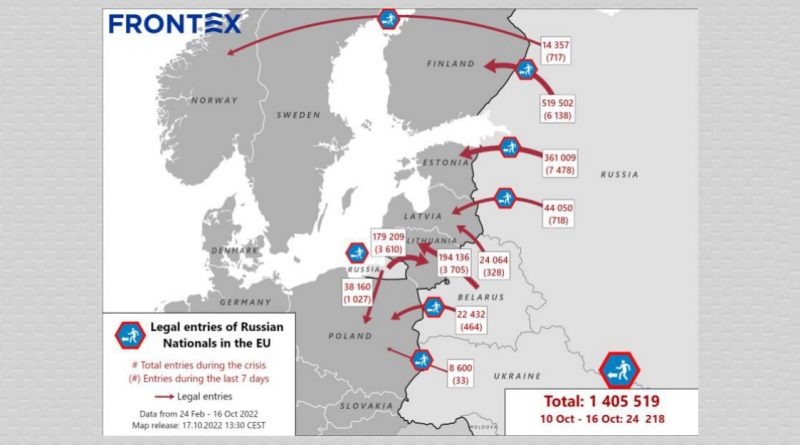 Since the beginning of the Russian invasion of Ukraine, more than 1.405 million Russian citizens have entered the European Union through its land borders, European Border and Coast Guard Agency Frontex said.

At the same time, more than 1.370 million Russians have returned to Russia via its land borders with the EU, the agency said.

Frontex said in a message on Twitter on October 19 that 24 218 Russian citizens had entered the EU over the past week, 1400 fewer than the week before. At the same time, 27 280 Russian citizens left the EU.

A significant increase in Russians entering the EU was noted after Russian ruler Vladimir Putin announced a “partial mobilisation” to bolster his country’s failing efforts in its war on Ukraine.

The UN High Commission for Refugees said that as of October 11, a total of 7 678 757 refugees from Ukraine had been recorded across Europe

The UN refugee agency said that 4 350 995 refugees from Ukraine registered for Temporary Protection or similar national protection schemes in Europe.

Separately, as of October 19, Bulgaria’s dedicated government portal Bulgaria for Ukraine said that since the February start of the war, 815 730 Ukrainians had entered Bulgaria. A total of 61 328 remained.

The portal said that Bulgaria had granted Temporary Protection to 141 443 Ukrainians. A total of 19 181 were accommodated through the government’s accommodation support scheme.

Migrant women and children on the move in Europe subjected to abuse, sexual violence – UNHCR