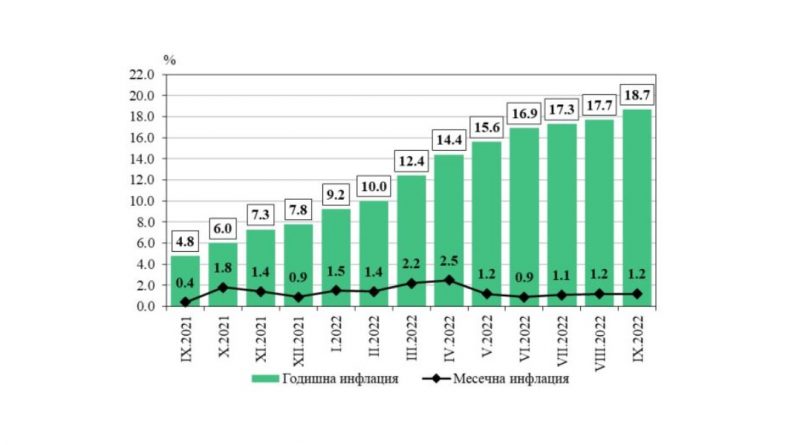 At the time, Bulgaria had just finished emerging from the 1996/97 economic crisis. The September 2022 figure also exceeds the 15.3 per cent annual inflation peak recorded in June 2008, during the global financial crisis.

Monthly inflation in September was 1.2 per cent, same as the figure recorded in August.

Food prices in September were up 2.2 per cent compared to the previous month, while non-food prices rose by 1.3 per cent and services prices fell by 0.1 per cent.

Compared to September 2021, food prices were 24.9 per cent higher, while non-food and services prices rose by 17.3 per cent and 12.7 per cent, respectively.

The harmonised CPI figure, calculated by NSI for comparison with European Union data, rose by 0.7 per cent on a monthly basis in September, while the annual harmonised CPI inflation was 15.6 per cent.

Food and beverage prices were 25.2 per cent higher, on an annual basis, while the price of utilities and housing increased by 29.3 per cent and transportation costs were 17.6 per cent higher compared to September 2021. The three categories account for about 48.5 per cent of the harmonised CPI basket.