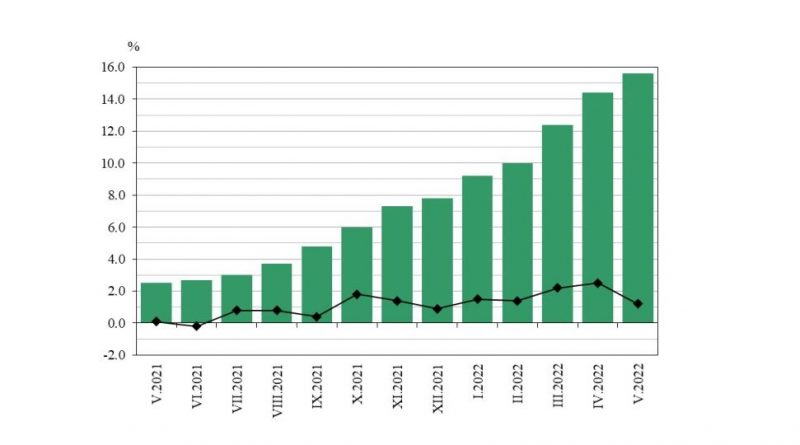 Bulgaria’s annual consumer price index (CPI) recorded 15.6 per cent inflation in May 2022, rising from 14.4 per cent a month earlier, data released by the National Statistical Institute (NSI) on June 15 showed.

This was the highest year-on-year increase in consumer prices since May 1998, when the annual inflation figure reached 18.8 per cent, as the sharp increase recorded in the past year is showing no sign of abating.

The figure exceeds the 15.3 per cent annual inflation peak recorded in June 2008, during the global financial crisis.

Monthly inflation in May was 1.2 per cent, compared to 2.5 per cent recorded in April.

Food prices in May were 1.8 per cent higher compared to the previous month, while non-food prices rose by 1.6 per cent and services prices shrank by 0.2 per cent.

The harmonised CPI figure, calculated by NSI for comparison with European Union data, rose by 1.3 per cent on a monthly basis in May, while the annual harmonised CPI inflation was 13.4 per cent.

This was the highest year-on-year increase in the harmonised CPI since July 2008, when the figure was 14.4 per cent.

Food and beverage prices were 22.1 per cent higher, on an annual basis, while the price of utilities and housing increased by 16.9 per cent and transportation costs were 25.9 per cent higher compared to May 2021. The three categories account for about 48.5 per cent of the harmonised CPI basket.

For a second consecutive month in two years, since the start of the start of Covid-19 pandemic in Bulgaria in March 2020, NSI made no mention of its ability to collect data being impaired and having to extrapolate statistical data.

Bulgarian business climate up five percentage points in May – NSI