The September nights were drawing in, it was dark by six and the leaves were starting to fall. The grapes hung full and ripe on the vine, ready for picking.

It was a few years since Stephan had died and I took a whimsical look at nature’s bounty, as I remembered my much-missed friendly neighbour and my efforts, helped by him, to produce a drinkable rakiya, the traditional strong village drink.

It would be a shame to waste them.

Could I make the rakiya on my own? I was sure that the necessary tools and his kazan (copper still) were still in the barn, untouched since his death.

I was also sure that Penka, his widow, would allow me to use the neglected equipment and produce a fine vintage in his memory in time for Christmas drinking.

Balancing precariously on my rickety steps, I managed to pick the grapes. It was a hard morning’s work, reminding me of the life of country folk in bygone days.

I then took my crop into the summer kitchen where I washed and crushed it, mixed the grapes with the required sugar and water in the fermentation barrel, and left the mixture to mature.

After about a month, I was again in the village, and with the mixture looking good, I started seeking Penka.

At last I spied her portly figure sweeping the path outside the family house.

“Oh how nice to see you, where is your wife?” came the reply.

“Oh she’s in England at the moment,” I said.

“I’ve had such a good crop of grapes and haven’t made any rakiya since Stephan died, I really would like to have one more try.”

“Oh all the tools and kazan are still there. Yes you can try, I’ll get one of the boys to help you.”

“Well if you don’t mind, I’d like to try on my own, in memory of Stephan’s teaching’’.

“Well the equipment is still in the barn, so you can help yourself.”

She ushered me down to the barn and pulled back the creaking old door. Daylight flooded in and I could see the traditional karuchka (cart), resting where it had been left since the donkey died a year or so before Stephan, and to one side, the kazan, still mounted on its bricks beneath the chimney.

The rest of the distillation equipment, though dusty and forlorn, was carefully stored on a bench.

Somehow the barn felt very cold and still and I felt a presence.

After various trials and tribulations, I had the still set up and was ready for my first brew. The “wine” produced in the barrel was carefully poured into the kazan and the lid carefully sealed with the traditional mixture of ashes and water.

The fire was lit, with a reserve pile of logs at the ready, and I settled myself comfortably on Stephan’s old chair in front of the kazan, waiting for the now blazing fire underneath to bring it to distillation temperature.

It was warm and comfortable, it had been a busy day and I was tired. My head kept nodding and I was soon snoring fitfully.

Suddenly I was awoken by the sound of escaping steam.

The paraffin lamp had gone out and the only light was from the fire.

Someone was there in the shadows, I could smell the smoke from a cigarette.

“Stephan?” I called out automatically.

No reply, just a gentle coughing.

I looked at the kazan, where was all this steam coming from? Obviously the pressure valve hadn’t worked and it looked like the whole apparatus was in danger of exploding.

“Folks have been injured and burned bad by their kazan exploding,’’ said a gruff voice, ‘’you should watch it more carefully. I’ve let go the pressure now, so you’re safe’’.

Frightened, I called “Stephan’’ again. I got up and went over to where the voice had come from.

There was no one there, just a faint smell of tobacco smoke, the rattle of the door and the sound of the whistling autumn wind. 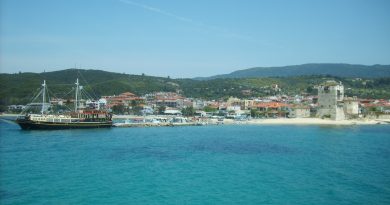