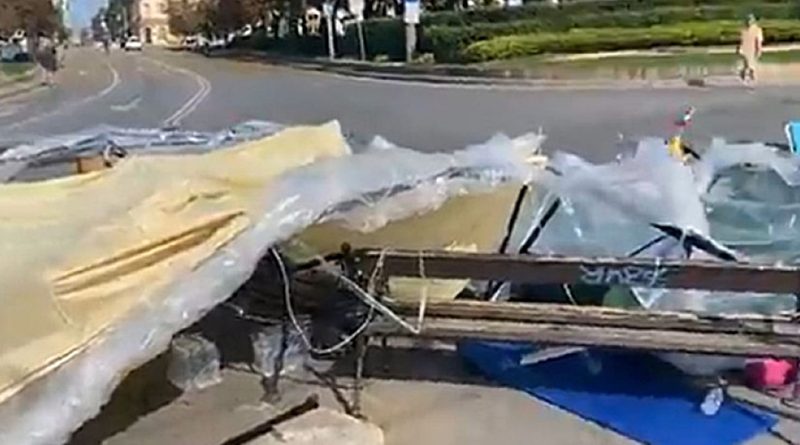 Three men attacked the tent camp of anti-government protesters in front of Sofia University in Bulgaria’s capital city Sofia on the morning of August 24, allegedly pelting the tents with stones and trying to drag them away, Bulgarian National Radio reported.

The incident came on the 47th day of protests demanding the resignation of Prime Minister Boiko Borissov’s government and of Prosecutor-General Ivan Geshev and the holding of early parliamentary elections.

BNR quoted a protester, named in the report as Anna-Maria, as saying that when the men began pushing the tents, she shouted “Hey! There are people in here”.

“However, they were not interested in that at all…They were aggressive, they said: ‘We’re coming to clean up’,” she said.

One of the protest organising groups, the “Poison Trio” alleged that it was Borissov’s GERB party that had “sent goons” to break up the tent camp.

Separately, the latest flying blockade was outside the Sofia regional administration building on the morning of August 24, demanding the resignation of regional governor Ilian Todorov, an ultra-nationalist politician who in a Facebook post last week called protesters who attacked the car of a woman who tried to run a street blockade “a raging alcoholic mob”. Todorov also described protesters as “freaks” and “bastards”.

The protesters threw flowers at the entrance of the building, saying that they wanted to meet Todorov to ask him why he used such epithets. Reportedly, Todorov was not in the building.

On the evening of August 23, protesters threw nappies at the building housing Bulgaria’s Cabinet offices, the latest in a series of objects used in the protests – earlier, on one occasion, protesters left toy cars for Borissov. The flying blockades of various institutions invariably have seen eggs thrown at the buildings.

On the morning of August 24, the youth organisation of Yes Bulgaria held a demonstration on the route leading to the Boyana Residence where Geshev was holding a national meeting involving about 700 prosecutors and investigators.

A large contingent of police and Gendarmerie controlled access to the road leading to the residence, resulting in some prosecutors being late for the meeting. Protesters shouted “mafia!” and called for Geshev’s resignation.

The meeting called by Geshev was billed as being on the topic: “Upholding the independence of the Bulgarian prosecutor’s office in order to prevent the risk of a serious violation of the rule of law under Art. 7 of the Treaty on European Union”. Geshev told the meeting: “”They call us mafia, because we showed that we would not allow double standards- one type of standards for billionaires and people with political influence and other standards for the rest of the people”.

The meeting was attended by Interior Minister Hristo Terziyski, Justice Minister Danail Kirilov, members of the National Assembly and of the European Parliament from all parliamentary groups except the opposition Bulgarian Socialist Party, as well as diplomats, BNR reported.