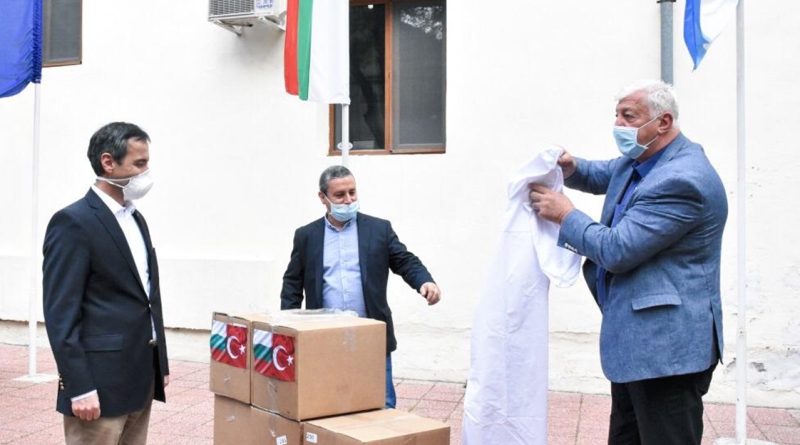 There have been 36 new confirmed cases of Covid-19 in Bulgaria in the past 24 hours, bringing the total to 1399, according to an evening update on April 28 by the national operational headquarters.

The death toll remains unchanged from 24 hours ago, at 58.

The number of people in hospital has gone down from 301 to 287. Thirty-nine are in intensive care, the same figure as 24 hours ago.

He said that priests were on the front line, alongside doctors, nurses and police. Given that Bulgarian Orthodox Church churches are open and anyone can attend and participate in worship, it is important to prevent possible contamination, Antonii believes.

Dveri said that prior to the Orthodox Easter, the operational headquarters had offered the possibility of testing to the church hierarchy, but they had turned the offer down.

Turkey’s consulates in Plovdiv and Bourgas donated essential equipment for the fight against Covid-19.

In Plovdiv, Turkish consul-general Hussen Ergani handed mayor Zdravko Dimitrov 100 reusable overalls of high-quality protective fabric, which had been made in Bulgaria using fabric from Turkey, Plovdiv municipality said on its website.

In Bourgas, Turkey’s consulate handed over 300 high-quality protective overalls to be distributed to health care facilities, the municipality said.

The Appellate Prosecutor’s Office in Varna has placed under its special supervsion more than 276 pre-trial proceedings in the appellate region for violating the rules and measures against the spread of Covid-19 and State of Emergency regulations, the Prosecutor’s Office said on April 28.

Of this total, four pre-trial proceedings are for disseminating fake news regarding the coronavirus infection, the statement said.

There are 148 pre-trial proceedings in Varna for breaking quarantine, 47 in Razgrad.

The educator’s trade union, with the Podkrepa labour federation, has called for all school pupils, including those in the seventh and 12th grades, to complete the school year via distance learning.

The Ministry of Education has not announced a decision about what to do about the balance of the 2019/2020 school year.

The Animus Association said that since the State of Emergency in Bulgaria started on March 13, nearly 240 people had called its hotline, which offers support and referral of victims of domestic violence to social services.

Bulgarian National Radio reported the association as saying that since Covid-19 came to Bulgaria, complaints of domestic violence had increased. Nadezhda Stoycheva, clinical psychologist and a director of the foundation, said most victims were women. Often, assaults were reported by relatives or neighbours, usually in smaller settlements.

About 25 per cent of women are victims of bullying, including well-educated women of high social status, the report said.

The Sofia District Court quashed Ataka party leader and Sofia city councillor Volen Siderov’s bail of 50 000 leva on charges that he had instigated a breach of quarantine measures during the Orthodox Easter holidays.

Judge Nikolai Urumov said that the prosecutor’s order imposing the bail was illegal.

Siderov was charged in connection with comments in a party political television broadcast opposing wearing masks in church and his call to people to go to church en masse at Easter.

Prosecutors said that Siderov had called on people to breach the measures to curb the Covid-19 pandemic, but Judge Urumov said that prior to and during the Easter holidays, there had been no legal ban on going to church.

Siderov has bail of 50 000 leva on another charge, also connected with comments he made in a television broadcast.

The restrictions imposed on flights between Bulgaria and the United Kingdom have been lifted and Bulgaria Air is resuming its flights from Sofia to London from May 1, the airline said on April 28.

Bulgaria has the lowest ratio of people with Covid-19 and third-lowest ratio of deaths from the disease, and this is an indication of how timely and good the country’s measures against the spread of the virus have been, Prime Minister Boiko Borissov told the National Assembly on April 28.

There will be no military parade on Bulgaria’s May 6 Armed Forces Day, the head of the operational headquarters against Covid-19, Major-General Ventsislav Mutafchiyski, said on April 28.