Mathematical models suggest that Bulgaria experienced a peak of Covid-19 in early April, which was followed by a decline, while the country is approaching a new peak, operational headquarters chief Major-General Ventsislav Mutafchiyski told a briefing on April 26.

According to figures released in an update at 5pm on April 26, the number of confirmed cases of Covid-19 in Bulgaria has reached 1300, an increase of 53 since the evening update on April 25.

A total of 301 people are in hospital, nine more than 24 hours earlier, with currently 41 in intensive care, an increase of four since the Saturday evening update.

The death toll of those in Bulgaria who have tested positive for Covid-19 has risen by one in the past 24 hours to 56, after a 70-year-old man died in Bourgas regional hospital on Sunday. The man had had cancer.

Bulgaria’s Health Minister Kiril Ananiev issued on Sunday an order that takes effect on April 27, allowing visits to public parks and gardens by certain categories of persons at specified times of day.

Urban parks and gardens may be visited by children up to 12 years ago, accompanied by a parent or parents or family member, but no more than two adults, between 9.30am and 6.30pm daily.

People may walk their dogs in public parks and gardens up to 9.30am and after 6.30pm. Each owner must walk his or her dog without being accompanied by anyone else.

Ananiev said that those visiting public parks and gardens must comply strictly with anti-epidemic measures, including wearing protective masks, keeping a physical distance from others of 2.5 metres, entering and exiting parks and gardens through designated places, as well as keeping to designated routes.

Consumption of alcohol in parks and gardens is banned.

People must avoid contact with surfaces, including by not sitting on benches and lawns, and obeying the instructions of officials on duty.

In all other respects, the ban on visits to outdoor and indoor public parks, playgrounds, sports grounds and facilities remains in place.

Mayors of municipalities must announce the arrangements for parks and gardens, according to the specifics of each place, the Health Ministry said.

Bulgaria’s Ministry of Labour and Social Policy said on April 26 that more than 61 000 employees are keeping their jobs thanks to the 60:40 measure. The measure provides for the state to pick up 60 per cent of payroll costs in certain listed sectors affected by the coronavirus crisis, while the employer must pay the remaining 40 per cent.

Within 12 days of the launch of the measure, 4445 applications had been submitted, covering 61 337 employees, the ministry said.

So far, applications from 715 employers had been approved, and they would receive compensation for keeping 11 996 employees in their jobs, according to the statement.

More than 37 per cent of the applications were from businesses in the hotel and restaurant sector, including restaurant, fast food places, bars, hotels and other places of accommodation. Together, these would receive state aid for 3555 employees.

Ten per cent of the approved applications from employers were in the manufacturing sector, and a further three per cent were owners of gyms and sports clubs. Also among those that had received approval included entertainment business companies and cinemas.

Payment of the compensation began in the middle of last week, the ministry said. The total amount of the funds allocated was more than 1.56 million, the statement said.

Third month of slight recovery in business sentiment in Bulgaria 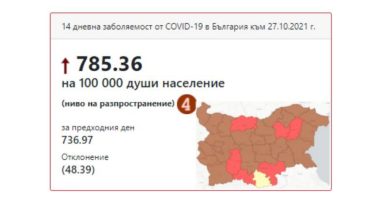