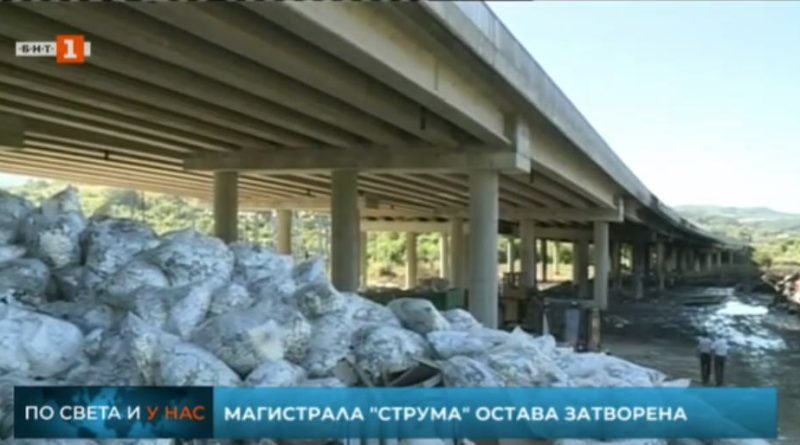 Bulgaria’s road infrastructure agency plans to allow partial traffic on the Strouma Motorway overbridge near the town of Doupnitsa damaged by fire last week, but said that repairs would take four months and would cost 1.86 million leva.

The fire happened during a heatwave, by the damage was made worse by the unauthorised large collection of plastic refuse under the overbridge, deposited there by the owner of a nearby depot.

The bulk of the damage was to the lanes with the traffic towards Greece, which would require the extensive repairs. After final tests, the Sofia-bound lanes could be opened for traffic before the end of the day on August 23, the road agency’s director Georgi Terziyski said, as quoted by Bulgarian National Radio.

He said that the agency will use the structurally-sound lanes to handle car traffic towards Greece on Friday and Saturday, and then reverse to carry traffic towards Sofia on Sunday and Monday. Strouma Motorway is the main road linking capital city Sofia to the Greek border, a popular destination for Bulgarian holidaymakers.

Lorries will not be allowed on the overbridge and would continue to use the detour via the E79 national road.

Terziyski said that the agency was not to blame for the illegal refuse dump under the overbridge because it had very limited property rights on the land, extending just two meters outside the overbridge footprint.

He said that the agency was still awaiting instruction from the environmental protection authorities as to where it could move the refuse that survived the fire.

As regards the ongoing check ordered in the aftermath of the fire and due to be completed on August 23, he said that there were other instances of illegal refuse dumps under motorways.

In one case, a construction company working on Strouma Motorway used the space under an overbridge near the town of Blagoevgrad as temporary parking for its heavy equipment. Terziyski said that the equipment had been moved but the company would still be fined.

(Bags of refuse seen under the overbridge on Strouma Motorway after the fire, screengrab from Bulgarian National Television)