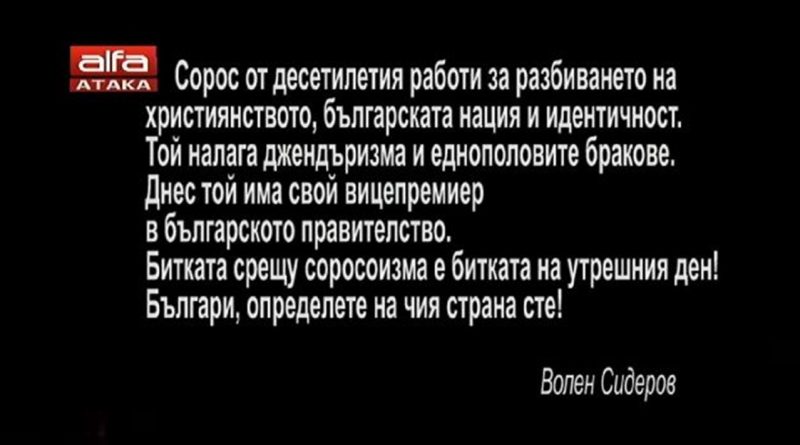 Among the slides was one describing Simeonov, a co-leader of the United Patriots grouping – the minority partner in government and of which Siderov is parliamentary leader – as “Soros’s man in the government”, and as “attacking” Orthodox Christianity.

This is the latest of a succession of episodes over several months in which Siderov and Simeonov are at odds, and comes after these tensions supposedly were resolved.

On the evening of October 15, Siderov’s mouthpiece television channel, Alfa Ataka, posted a notice saying that it “stops”, with a message telling viewers to “ask the government why”.

Bulgaria’s broadcast regulator the Council for Electronic Media (CEM) said that it did not know why Televizia Alfa was not showing its programming and said that it had not withdrawn its licence nor imposed any penalties on it. At a meeting on October 16, CEM decided to write to the station to ask it why it was not broadcasting.

Reporters were unable to reach Siderov or other Ataka politicians for comment, while there was no announcement about the matter on the party’s or the channel’s websites and social media.

The new messages from Siderov on the channel began on the evening of October 16, linking Simeonov to Soros – a frequent target for ultra-nationalist conspiracy theorists – and saying, among other things, that the “battle against Sorosism is the battle for tomorrow”.

The third co-leader of the United Patriots, Deputy Prime Minister Krassimir Karakachanov, told Bulgarian National Radio that a broadcaster could be stopped only by a decision by CEM “and there is no such decision, so I do not know what this is about”.

Bulgaria heads to European Parliament elections in May 2019 and municipal elections in autumn next year. It remains unclear whether the United Patriots, which currently brings together the parties headed respectively by Simeonov, Karakachanov and Siderov, will stand together in those elections.

Siderov also has expressed frustration at the cancellation of a succession of meetings of the government coalition council, which he wants to use to push for his nominee to become the next chief secretary of the Interior Ministry.