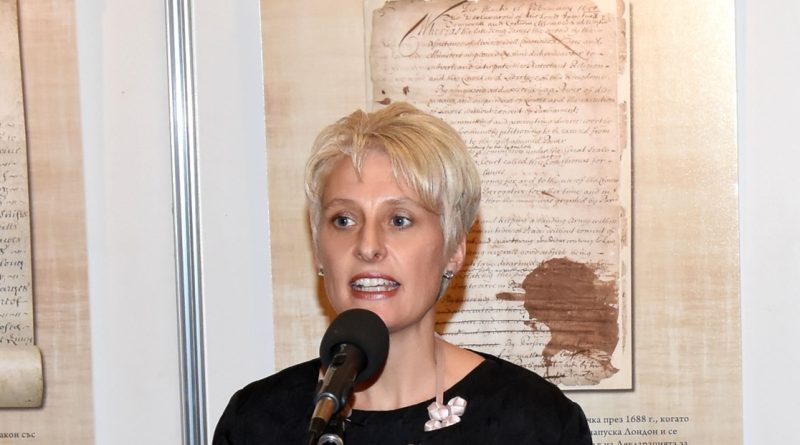 UK ambassador Emma Hopkins said in a television interview on October 11 that she shared Prime Minister Boiko Borissov’s disappointment with the way the media had covered the murder of TV presenter Viktoria Marinova.

Hopkins was speaking to Nova Televizia the day after Borissov summoned foreign ambassadors to the Cabinet building in Sofia to express his frustration at the way that foreign politicians and the media had reacted to the murder.

Borissov has been upset by the media, commentators and media freedom watchdogs having instantly linked the murder of Marinova to the state of media freedom in Bulgaria.

A 21-year-old man is in custody in Germany, pending an application to extradite him to Bulgaria, to face charges of the rape and murder of Marinova. Prosecutor-General Sotir Tsatsarov said on October 10 that the leading theory about the murder, which took place in a bushy area next to the Danube in Rousse on October 6, was that it had been a spontanous attack.

Hopkins said that at the meeting between Borissov and the ambassadors, they had been given interesting and up-to-date information about the murder.

“He said he was disappointed with the way the case was reported in the international media and I share his disappointment.”

She said that the police had collected a lot of evidence in a few days, a European arrest warrant had been issued, and every European police service should be proud of such results.

“I fully sympathize with the Prime Minister about his disappointment. It feels like Bulgaria is betrayed in the media, and many hasty conclusions drawn about the circumstances surrounding this murder,” Hopkins said.

Hopkins also sharply criticised the fact that absent from the coverage of the Marinova case was “that it was a brutal sexual offence against a woman”.