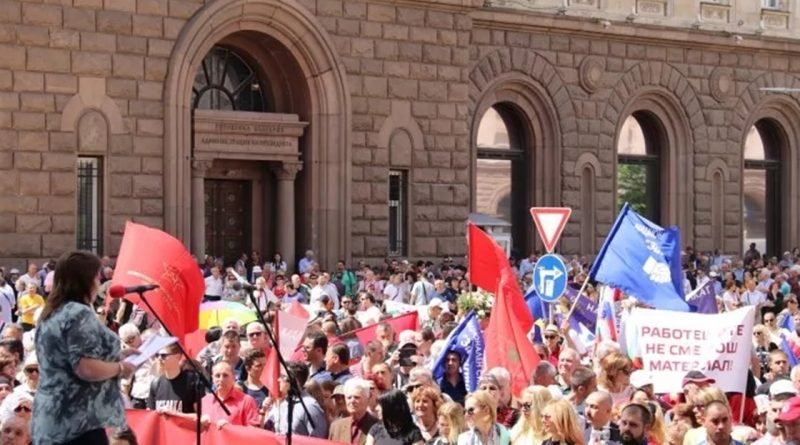 The opposition Bulgarian Socialist Party (BSP) took the opportunity of the May 1 Labour Day public holiday to demand the resignation of the government, while trade union federations campaigned for “decent pay” equivalent to that in other European countries.

The BSP is the lineal successor of the Bulgarian Communist Party, which in the years that the country was in thrall to the communist regime, used May 1 to showcase mass “spontaneous manifestations” and demonstrate loyalty to the Kremlin and Marxism-Leninism.

On May 1 2018, the party sought to re-ignite enthusiasm by rallying its supporters in a “national protest” in Sofia, billed as being against “corruption, misery and poverty”.

At the rally, which the party claimed to have an attendance of 10 000, though reporters at the scene were more conservative in their estimates, sticking to describing turnout as in the thousands.

BSP leader Kornelia Ninova reiterated a call some days ago by President Roumen Radev – head of state after being elected on a ticket backed by the BSP – to “illuminate the parallel state”, words from Radev that had sparked the latest verbal skirmishes between him and Prime Minister Boiko Borissov’s ruling party.

“Let’s illuminate the face of the government, the real thing, and not the other thing that on our TV sets every day convinces that the state is blooming and the people live in prosperity,” Ninova said.

Ninova’s words had a certain irony; it may be that at least some major television channels in Bulgaria currently are doing what she describes. However, in the communist era, the sole state television channel certainly did portray a state that was blooming while the people lived in prosperity. In Bulgaria, fake news has a long history.

Radev, in a Facebook post, sent greetings on Labour Day, describing it as “one of the holidays that transcends national border and cultures”.

“Respect for labour is a measure of public justice. In many regions and in many professions, labour is underestimated. That is why I would like to congratulate people who assert the right to decent work and fair pay,” Radev said.

“A society in which the path to success does not go pass through labour and creation, but through corruption and clientelism, it is doomed to a constant crisis and dissatisfaction,” he said.

Trade union federations marched, demanding a reduction in night work, decent pay, and the equalisation of pay in Bulgaria to that in other European countries.

Recent surveys established that Bulgaria has the highest income inequality in the EU, while nine in 10 Bulgarians see the differences in people’s incomes as too large.

Separately, a protest was held in Sofia in which hundreds of parents gathered outside Parliament demanding free child health care, monthly child allowances for all parents, pensions for children with a deceased parent, and quality education for children. In the course of the protest, they symbolically “buried the future of Bulgaria”.