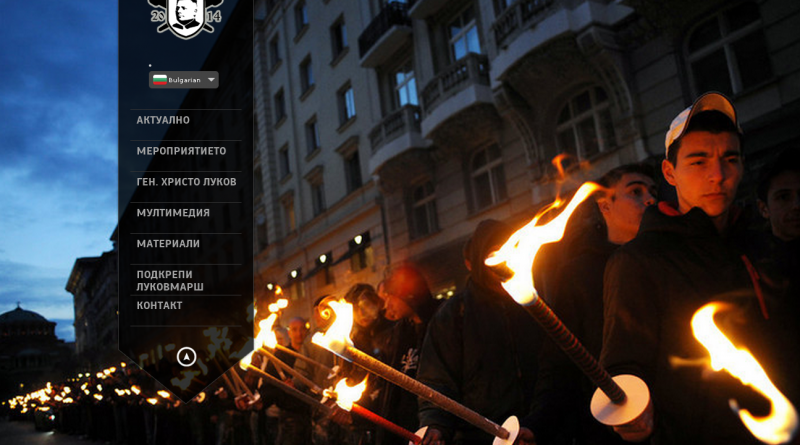 The Shalom Organization of the Jews in Bulgaria is campaigning against the holding of the annual “Lukov March” in Sofia in February 2018, calling for an effective ban on an event that honours a pro-Nazi general – at a time that for six months Bulgaria will hold the rotating presidency of the European Union.

The Lukov March has been held for the past 14 years, drawing dark-clad supporters for a torchlight march in honour of Hristo Lukov, who was leader of the Union of Bulgarian National Legions, a fascist organisation that held considerable influence over the government of Bulgaria during the Second World War, when the country was allied to Nazi Germany.

Past Lukov Marches have been refused municipal permission, but have gone ahead anyway, with a substantial police escort.

In a declaration, Shalom is calling on the national and municipal authorities to impose an effective ban on plans to hold a “Lukov March” in the capital city.

The declaration calling for the ban goes on to say:

“First held in Sofia in 2003 and repeated annually, the “Lukov March” is organised by far-right groupings in honour of Hristo Lukov, who at the time of the Second World War was leader of the Union of Bulgarian National Legions, a pro-Nazi organisation that – among other things – had been an overt supporter of the Defence of the Nation Act that came into effect in Bulgaria in January 1941.

This anti-Semitic legislation, modelled on Nuremberg laws of Hitler’s Germany, deprived Jews in Bulgaria of the spectrum of civil rights, running counter to Bulgaria’s constitution and traditions of ethnic tolerance. It was part of a policy by the government of the time that not only humiliated Jews but also caused untold financial and economic damage to the community by deprivation of the right to earn a livelihood. A punitive tax on Jews, and the imposition of forced labour on male Jews in camps where conditions were dire, followed. It was these inhumane and abusive measures that Lukov, who had considerable influence on the regime of the time, enthusiastically supported.

The anti-Semitism embodied by Lukov and his ilk was the antithesis of that bright moment in Bulgaria’s history when, led by the Bulgarian Orthodox Church, political leaders such as Dimitar Peshev, and the majority of society from intellectuals to ordinary people, a campaign succeeded to prevent the deportation of Bulgarian Jews to the death camps of the Holocaust. However, at the same time, the regime that Lukov supported allowed the deportation of 11 343 Jews from territories in northern Greece and Yugoslavia to meet their deaths in Treblinka.

In the first six months of 2018, Bulgaria will hold the rotating presidency of the Council of the European Union. The country’s place in pole position in the bloc will require it to assume a role of leadership and of upholding the shared values of the European Union, including those of tolerance and the rejection of extremism, encompassing the rejection of racism, xenophobia, anti-Semitism and all other forms of intolerance.

It would be anomalous for the country that would be the “capital” of the EU in that time to see a night parade of torchlight-wielding, dark-clad supporters of a man and an ideology that epitomised that darkest times of 20th century European history – times that, in fact, made the European project necessary as an antidote against a repeat of that catastrophe. Now, in the 21st century, when intolerance including anti-Semitism is again on the rise in Europe, this continent and its countries and capitals cannot afford displays that echo those disastrous times.

Administrative action against the Lukov March has to go further than the mere announcement of withdrawal of permission for the event, while in effect allowing it to proceed. There must be no room on the streets of a European capital for a parade that worships a man and an age that represented this most sinister part of our history.

Bulgaria is rightly proud of its courage in preventing the deportation of Bulgarian Jews in 1943. At the same time, it mourns the mass-murder of the Jews from the “new territories” among the more than six million Jews who were killed in the Holocaust. In 2018, Bulgaria will be commemorating the 75th anniversary of these events. In the context of Bulgarian and of European history, permitting the “Lukov March” would be an abomination. In 1943, Dimitar Peshev said that allowing the deportation of the Bulgarian Jews would be a stain on the forehead of Bulgaria. Let us remember his words, the words of a man honoured by Yad Vashem as Righteous Among the Nations, and permit no stain on the face of Bulgaria.”