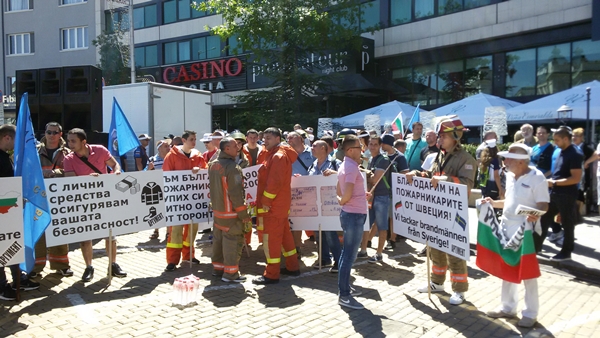 More than 1000 Bulgarian police, backed by firefighters and prison warders, held a protest in central Sofia on July 5 to push their demands for higher pay and against their working conditions.

Organised by trade unions of Interior Ministry employees, the protest, announced some weeks ago, went ahead after police remained dissatisfied with the few concessions offered by the ministry’s leadership.

The protest was held on the day marked annually as the Day of the Interior Ministry. Not far from the protest held opposite the National Assembly, an official ceremony was held at the Monument to the Unknown Soldier, celebrating 138 years since the founding of Bulgaria’s Interior Ministry.

Among several grievances has been that police have had to pay for their own uniforms and other equipment.

Other grievances among Bulgaria’s police include contradictory regulations, drastic breaches of the principle of equal pay for equal work, and a lack of motivation for career development.

The ministry has proposed to compensate those who have reached into their own pockets to pay for their uniforms, but Interior Minister Valentin Radev has indicated that a budget adjustment for salaries may come only next year. For the uniforms, a sum of 30 million leva (about 15 million euro) has been set aside, to reimburse purchases made in the past four years. 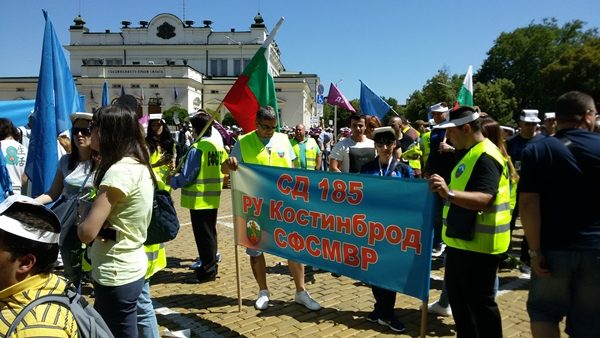 Radev said that there were also demands for higher salaries in other sectors. The day before the protest, Radev said that he could not understand what the unions were trying to convey by it.

On the eve of the protest, Radev published for public discussion a draft order on increases in overtime pay.

Valentin Popov, head of the management board of the union of employees of the Interior Ministry, said that the union could not accept Radev’s arguments against a salary increase.

It would not be unprecedented to revise the current budget, he said. Popov said that in recent years, the minimum and average salaries in the country had gone up by more than 50 per cent, but salaries of Interior Ministry employees by only 15 per cent.

The union would not give up on its demand for an immediate increase in salaries, Popov said. The union also wanted amendments to the current Interior Ministry Act, and an urgent start to work on an entirely new act, he said.

Popov said that the staffing problem at the Interior Ministry was worsening because fewer people wanted jobs as police and as firefighters, because of the low pay.

A further protest has been scheduled for July 18.