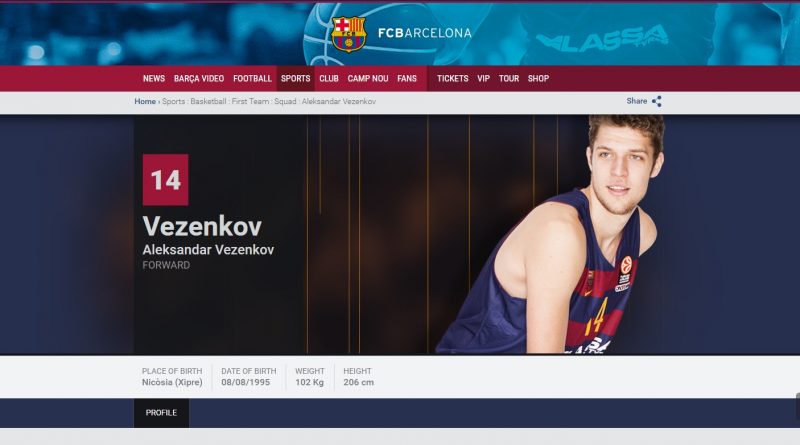 Bulgarian forward Alexander Vezenkov was selected by the Brooklyn Nets in the second round of the National Basketball Association (NBA) draft on June 22. Vezenkov, who turns 22 in August, currently plays for Barcelona in Spain and is expected to spend one more year in Europe before moving to the NBA.

Listed at 2.06m and 102kg, Vezenkov plays forward and is rated as one of the most promising European players in his age group. Last year, he played in 32 matches for Barcelona, averaging nine points, 3.1 rebounds, 0.8 assists and 0.3 blocks in 19 minutes a game, according to statistics kept by Spain’s top league, Liga ACB.

Vezenkov was born in Cyprus, where his father Sasho Vezenkov, a former captain of Bulgaria’s national men’s basketball team, moved in the later stages of his career. He grew up in Greece, where he started his professional career with Aris Thessaloniki in 2011, winning the Greek league’s best young player award for three straight years, from 2013 to 2015.

In 2015, his final years in the Greek league, he also won the most improved player, top scorer and most valuable player awards.

He holds triple citizenship – Bulgarian, Cypriot and Greek – but plays for the Bulgarian national team, winning the top scorer awards at FIBA Europe junior championships in 2011, 2013 and 2014.

Vezenkov declared for the 2016 NBA draft after his first season with Barcelona but withdrew before the international players deadline. He was chosen by the Nets in the second round of 2017 draft, with the 57th pick overall.

(Screengrab of Vezenkov’s profile page on the Barcelona website.)