The ceremony of handing over the mandate will take place at the Presidency in Sofia on Thursday at 10.30am, Radev’s office said.

Borissov’s centre-right GERB won the largest number of seats in Bulgaria’s March 26 2017 parliamentary elections, 95 out of 240.

GERB and the nationalist United Patriots, which won 27 seats, have been in talks on forming a coalition government. Together, the two groups have just enough support in the National Assembly to get a government voted into office.

Borissov has said that the proposed cabinet will be announced on May 3. It is expected that the vote will take place on May 4.

Apart from the 122 votes that GERB and the United Patriots should be able to muster, Vesselin Mareshki’s Volya party, the smallest group in the National Assembly with 12 MPs, has said that it will vote in favour of the Borissov coalition government taking office.

Borissov has been voted in as Bulgaria’s prime minister twice before, in July 2009 and in November 2014. Neither government served a full term. One of the nationalists’ conditions for joining Borissov in government has been an undertaking that the new government will serve a full four-year term.

The announcement about the handing over the mandate came a day after Radev completed a round of consultations with all five parliamentary groups, ending with a meeting with Borissov and GERB parliamentary group leader Tsvetan Tsvetanov.

Bulgaria’s constitution specifies that after a parliamentary election, the head of state must offer the parliamentary group with the most seats in the National Assembly the opportunity to seek to form a government. The recipient has a deadline of seven days to come up with a government that can be elected into office.

Should the first attempt fail, a mandate is then offered to the second-largest parliamentary group. In the case of the 44th National Assembly, that would be Kornelia Ninova’s Bulgarian Socialist Party. Ninova has said that if Borissov fails, she will seek to form a coalition government.

Should the second attempt fail, the President has a free hand to offer a mandate to any other parliamentary group of his choice.

Should all three attempts fail, the President dissolves the National Assembly and calls new elections. 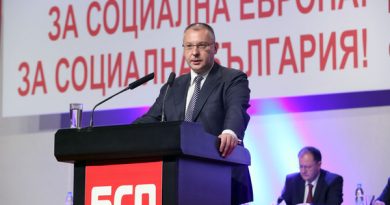 BSP stood up to ‘subversion’ and government is a success, Stanishev tells congress