Yanakiev, a philosophy professor who is also an editor-in-chief of the Bulgarian-language magazine Christianity and Culture, said in an interview with bTV that the arguments of the Bulgarian Orthodox Church for not taking part in the Pan-Orthodox Council were not very convincing.

The Pan-Orthodox Council, formally named the Holy and Great Council of the Orthodox Church, is currently underway in Crete, but with some churches absent, including the Russian and Bulgarian Orthodox churches.

Yanakiev gave the example of the argument that the decisions of the council should be taken with full consensus, saying that this rule was imposed years ago precisely by the Russian church so that no other Orthodox church could impose anything.

He said that his suspicions of Russian involvement increased when recently a Russian site, of Putin ally Aleksandr Dugin, posted a “vile lampoon” against Yanakiev and his colleagues who had advocated the participation of the Bulgarian Orthodox Church in the Pan-Orthodox Council. The material has subsequently been removed from the site.

“At the moment we are committing a sin – to divide Orthodoxy into Russian, with which are Georgia, Bulgaria and Syria, from the Orthodoxy of the rest of the world. This is a schism,” Yanakiev said.

He said that behind the actions of Russia stood the geopolitical interests of Russian president Vladimir Putin, who was using the Russian Orthodox Church to advance them.

Russia could not bear it that the Ecumenical Patriarch of Constantinople was first in the hierarchy of the Patriarchs, but Russia was in fifth place, on the grounds of when their church was first founded.

The Bulgarian Orthodox Church’s Metropolitan of Western and Central Europe, Antonii, set out in a Bulgarian National Radio interview the arguments for the church not going to Crete.

“The view that nothing can be altered in the documents adopted, the lack of any discussion during which we could uphold the position of the Holy Synod – that is what prompted us to make this decision not to take part in the Council. We think that it would only have been attendance, not participation, with no prospect of changing these documents, for which we have every reason,” Antonii said.

Responding to the criticisms from theologians and lecturers at the Faculty of Theology about the Bulgarian Orthodox Church not attending the Pan-Orthodox Council, Antonii said: “There are as many opinions as there are people. The BOC has stated its reasons and the fact that some of our views are the same as the views of the Russian, the Georgian or Antiochian church can in no way be construed as meaning there is any interference in the sovereignty of any of the Orthodox churches .

“On the contrary, when opinions coincide, there is good reason for that. This is not a mere whim. As you will agree, a forum like this has not taken place in 13 centuries, so the responsibility of each of the churches is enormous. That is our view and with the decision of the Holy Synod we are demonstrating that we do not want the Council not to take place at all, we just want it postponed.

“We think that a Council as important as this for Orthodoxy as a whole must only be held when it has been prepared thoroughly, and most of all, that all issues pertaining to the life of the Orthodox Church must be discussed,” Antonii said.

Wherever there are impediments they must be eliminated by general consensus and in light of the better functioning of the church, he told BNR.

“So, we shall under no circumstances agree to be accused that by not taking part we are trying to sabotage and prevent the long-awaited forum from taking place. Quite the contrary – there has not been a Council in 13 centuries, so what’s stopping us from postponing it by one year so it can be prepared properly? Because out of 100 questions, only six will be debated. What about the remaining 94, when are we going to debate them? In another 100 years? ” Antonii said.

(The headquarters in Sofia of the Holy Synod of the Bulgarian Orthodox Church. Photo: (c) Clive Leviev-Sawyer) 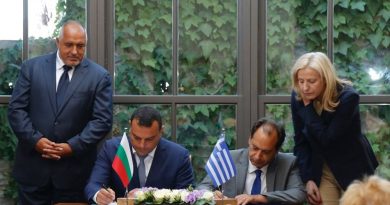