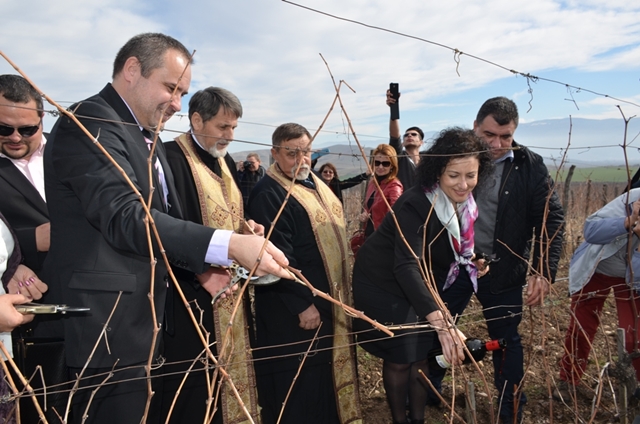 More than 50 million litres of wine of the 130 million produced in Bulgaria in 2015 will go to exports, Agriculture and Food Minister Dessislava Taneva said on February 14 2016.

Taneva was speaking a ritual vine-cutting ceremony at the Bessa Valley winery in the village of Ognyanovo in the Pazardzhik region on the day that Bulgaria marks the feast of Trifon Zarezan, dedicated to vineyard traditions.

She said that this level of exports had been achieved in spite of the limited market in Russia, and she added that Bulgaria had marked a record increase in exports to countries including China, the UK and Germany.

“These are countries whose consumers have high demands and the fact that exports succeed in such markets suggests that Bulgaria produces exceptional quality wines and confirms the professionalism of all those working in the field of viticulture and winemaking,” Taneva said.

She urged Bulgaria’s 262 wine-producing firms to produce wines that continue to be innovative and to use every instrument to be represented in the various markets.

“The wine sector is definitely one of the sectors that are competitive, high-tech, export-oriented and known in foreign markets and has the prospect to grow more strongly there,” Taneva said.

She said that Bulgaria has upgraded facilities and technological capacity to produce nearly 200 million litres.

A significant trend was that many wineries were oriented towards manufacturing and exporting wines of the highest class, Taneva said.

“It is important to us that there are such wineries, that establish vines and technological capacity to the latest trends. This allows them to acquire raw materials at a good price and maintain high quality,” she said.