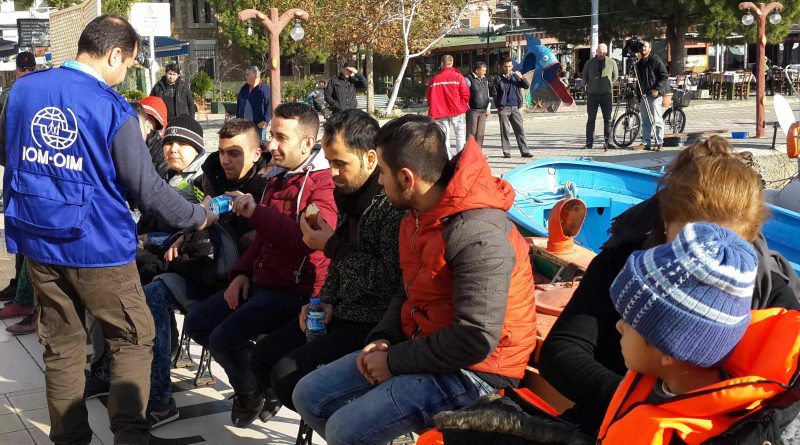 European Union officials are urging Turkey to open a border crossing where tens of thousands of Syrian civilians arrived this week fleeing a massive government offensive in Aleppo province.

EU foreign policy chief Federica Mogherini said Saturday at a meeting with European foreign ministers and their Turkish counterpart that EU support for Turkey “is aimed exactly at guaranteeing” that the country can handle the influx of refugees.

“It’s unquestionable… that the people coming from inside Syria are Syrians in need of international protection,” Mogherini said at the meeting in Amsterdam.

Turkish Prime Minister Ahmet Davutoglu told a Syria donors’ conference in London two days earlier that Ankara would allow the refugees into the country. But tens of thousands of displaced civilians who arrived on the Syrian side of the Turkish border this week are stuck waiting, camped out in the desperate hope that Turkish officials will allow them to cross to safety.

Turkey is providing humanitarian aid but has not opened the crossing, despite Foreign Minister Mevlut Cavusoglu’s comment Saturday that his government has an “open border policy” for people escaping military violence and Russian airstrikes. Media reports note that Turkey did let more than a dozen Syrians injured in bombings near Aleppo cross the border.

Syria’s official news agency SANA reported Friday that it had regained control of several towns in Aleppo, once the country’s commercial hub and now a flashpoint for violence between government forces and opposition fighters.

Turkey is host to an estimated 2 million Syrian refugees already, as Syria approaches the five-year anniversary of the start of its civil war.

European pressure is on Turkey as the gateway for refugee access to Europe. In a $3.35 billion deal announced in November, the EU agreed to accelerate talks about Turkey’s long-sought accession to the bloc, in exchange for Ankara’s help in managing the historic tide of refugees and migrants arriving in Europe in the past several years.

In Amsterdam on Saturday, police detained several people as groups of anti-migrant, anti-Muslim protesters faced off with left-wing opponents in a square near the capital’s city hall.

Thousands of Czechs gathered for a similar rally in Prague, with protesters representing both support for and opposition to recent refugee arrivals.