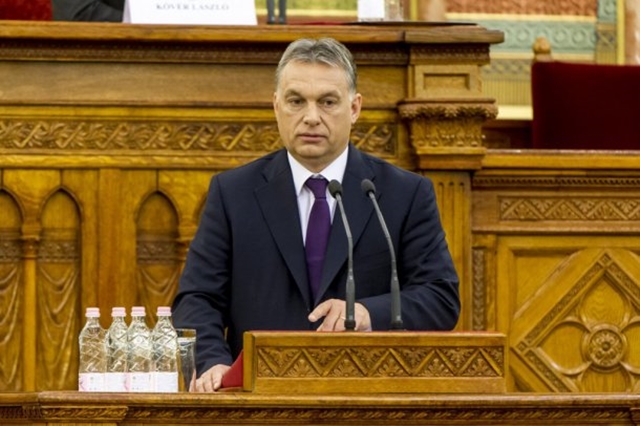 They endured snow and cold.  A few hundred protesters turned out here in Hungary’s capital in a show of opposition to a proposed constitutional amendment by Prime Minister Viktor Orbán and his governing Fidesz party.

Hungary’s combative Orbán – a politician who has become a pariah to the European left – wants new emergency powers for the government, allowing it during a “state of terror” to restrict communications and the media, suspend the right of assembly, shutter the borders and impose curfews for 60 days.

“The plan would put an end to democracy once and for all,” protest organizer and former socialist government minister Lajos Bokros warned the crowd Sunday outside parliament as the protesters stamped their feet to keep out the frost.

Anti-government protests are a fixture on most weekends in Budapest these days, much as they were in London in the 1980s during the era of late British Prime Minister Margaret Thatcher, another politician who was determined to shake things up and challenge establishment as well as liberal beliefs.

As far as the Hungarian and European left are concerned, the “state of terror” proposal, scheduled for debate next month by lawmakers in the Fidesz-dominated legislature, is just one more black mark against Orbán.

He is winning converts among other right-wing central European populists to his hard-line anti-migrant stance and applause from them for his frequent goading of Brussels. His rejection of more European political integration isn’t helping to appease the European left.

Since his reelection in 2010, critics have roundly denounced Orbán for what they see as a dismantling of democratic checks and balances. He has been described both in Hungary and elsewhere in Europe as an autocrat and xenophobe and dubbed a Hungarian Mussolini.

Politico, an American and European news site, has labeled him “Europe’s Next Dictator.”

His defenders say double standards are at work in the use of hyperbolic epithets.

Foes point to a series of other actions to highlight their argument that Orbán is an autocrat in the making: from government contracts and procurement tenders being steered to politically aligned businessmen to the treatment of the media. They also note his disdain for foreign-funded NGOs, especially those financed by the European Union and by Hungarian-American billionaire investor George Soros, a human rights advocate. Orbán studied at Oxford University thanks to a Soros grant.

The state-owned media now work as government propaganda organs, they say. And they highlight Orbán media laws making it a crime – punishable by fines of up to $900,000 – to publish “imbalanced news coverage” or material insulting to “public morality.”

No prosecutions have been mounted under the new laws, though.

According to Tamas Bodoky, editor-in-chief of the leftist investigative news portal atlatszo.hu, Orbán hasn’t had to use the laws.

“It hasn’t been necessary,” he says, “because the pure economic superiority of the pro-government media is enough to reach a state where average people get the government propaganda.”

Orbán allies own most of the commercial press, he says.

“There is a huge difference with Turkey or Russia, where you can get jailed if you publish critical stories, and you can get beaten, tortured or shot. And none of this is happening in Hungary. There is political and economic pressure and smear campaigns, but they won’t come here and beat me up,” says Bodoky.

He says that Orbán displays autocratic tendencies, and that who knows what will happen in the future.

Fidesz began life in the late 1980s – in the final gasp of communism – as a small libertarian student movement.  But since the 2008 financial crash, it has morphed under Orbán into a populist national conservative party, even turning its back on free market economics – a move that troubles even some of his right-wing defenders. Orbán’s message is clear: National sovereignty is being undermined by globalization, and nation states and their traditional cultures and lifestyles are being weakened by bankers and Eurocrats.

Gerald Frost, an analyst at the Danube Institute, a center-right research institution in Budapest, says Orbán is an intellectual who loves debate and relishes stirring up controversy.

“A lot of the hyperbole about him now can be traced to the deep political animosities remaining in Hungary from the communist era,” he says. “There are unresolved conflicts. There has been no real reconciliation. No one was punished for any of their actions during communism.”

Orbán “is a fearless warrior, a politician with a lot of dexterity and a real understanding of the man in the street,” Frost says, adding the politician enjoys nothing better than testing the limits and patience of EU institutions.

He did that last September, ordering a 175-kilometer-long steel and razor-wire fence to be built along the border with Serbia. Since then, he has delivered a stream of scornful condemnations of failed EU bids to bring some order to the chaos of the migrant crisis affecting the continent.

His goading of Brussels partly explains the venomous attacks unleashed on him, argues John O’Sullivan, a former adviser to Margaret Thatcher and the founder of the Danube Institute. “He is skeptical toward ideas of supranationalism and global governance that underpin the European Union itself,” says O’Sullivan.

O’Sullivan argues there is a buccaneering, experimental side to Orbán.

In the forward to a new collection of essays on the politician, O’Sullivan writes: “He is intellectually adventurous. He gets bored by having to stick to the same political ‘line’ day after day. He wants to explore new ideas. He is prepared to take some risks in doing so. He likes spontaneity. He speculates in public. And, of course, he gets into trouble.”

Trouble came quickly a year ago. When thinking aloud at a rally of young supporters, he announced that liberal democracy wasn’t doing so well, so maybe “illiberal democracy” would work better.  Says O’Sullivan, “As soon as I heard that, I knew that this phrase would be hung around his neck forever.”