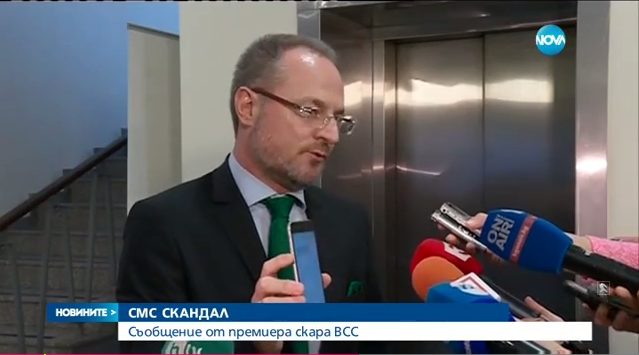 Bulgarian Prime Minister Boiko Borissov interrupted the weekly meeting of the Supreme Judiciary Council (SJC) on January 14, ostensibly to offer re-assurances that he was not involved in a simmering wire-tapping row, but his unannounced appearance raised more questions than it answered.

Borissov showed up with the meeting already in progress, after receiving a text from an unnamed source – with the wording implying that the sender was a member of the SJC. The text said that Supreme Court of Cassation head Lozan Panov had asked that the SJC invite Borissov to appear in front of the body to answer questions regarding leaked wiretaps of conversations between two former judges.

Panov showed reporters the text forwarded by Borissov, which the PM later confirmed was authentic.

Borissov appeared unusually flustered in speaking to the media before joining the meeting, saying that the SJC had no legal right to ask him to attend a hearing.

Speaking to SJC members, Borissov said that he had no involvement with the wiretaps, dubbed “Yaneva-gate” by Bulgarian media, and said that the council should avoid becoming involved in “political games”. After Borissov’s departure, the SJC voted to end its inquest in the matter, as recommended by its ethics committee a day earlier.

The conversations, allegedly between the former head of the Sofia City Court Vladimira Yaneva and former judge Roumyana Chenalova, have been leaked over a period of weeks in November and December. The discussions implied a degree of collusion between key officials in the judiciary and executive branches, with a voice purported to be Yaneva claiming in some recordings that prosecutor-general Sotir Tsatsarov had been ordered by Borissov to “make a scapegoat” of her.

Yaneva and Chenalova are both facing legal proceedings for unrelated issues – Yaneva is on trial for allegedly overstepping her authority in authorising the use of covert surveillance beyond the limits imposed by law (she resigned in February 2015), while Chenalova is the subject of an investigation over her handling of a bankruptcy hearing, which raised suspicions that two French-owned companies were the target of a corporate raid (she was initially suspended and then fired in November 2015).

(Yaneva has attracted controversy since her appointment as head of the Sofia City Court in 2011, over a case of alleged conflict of interest that she presided over, as well as the fact that she was a close family friend of Tsvetan Tsvetanov, one of Borissov’s closest allies.)

There has been little push to investigate the substance of the various claims made in the recordings, with the SJC and prosecutor’s office inquests focusing instead on their source. Panov and former justice minister Hristo Ivanov, who resigned after a curtailed version of the constitutional amendments aimed at judiciary reform were passed by Parliament last year, have been among the few senior officials demanding a closer look at the contents of the wiretaps.