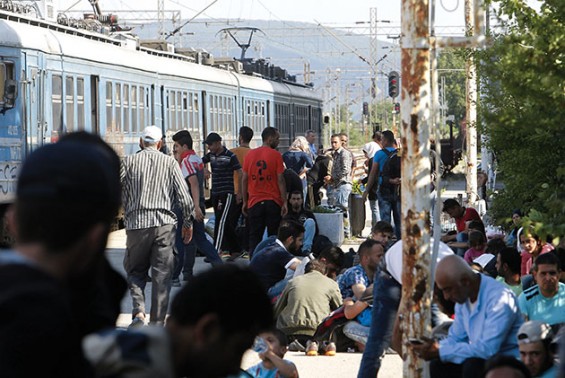 European Union foreign policy chief Federica Mogherini is urging the 28-nation bloc to quit quarreling over how to relocate the thousands of asylum-seekers from war-wracked Syria and elsewhere in the Middle East.

“Our internal unity strengthens our external action or weakens it,” she told reporters in the Lithuanian capital, Vilnius.

EU justice and interior ministers are to meet Tuesday and EU leaders hold a summit Wednesday, with talks at both gatherings centered on Europe’s biggest stream of migrants since World War II.

European Parliament President Martin Schulz said he fears the EU summit will end in discord. He met Monday with French President Francois Holland to try to “avoid widening differences and gaps that are existing already” among EU countries.

Hungarian Prime Minister Viktor Orban, Europe’s most outspoken migrant foe, told his parliament in Budapest, “They are overrunning us. They’re not just banging on the door, they’re breaking the door down on top of us.”

At Orban’s request, the parliament handed the Hungarian army sweeping new authority to control the migrants at the border and police the right to search homes for migrants who have entered the country illegally.

Croatia demanded Greece stop sending refugees on to the rest of Europe, even as it opened a refugee center for 27,000 migrants and promised them help in getting to other countries.

“It is absolutely unacceptable to have Greece emptying its refugee camps and sending people towards Croatia via Macedonia and Serbia,” Interior Minister Ranko Ostojic said.

Croatia said the migrants had arrived in its territory after Hungary blocked its border last week. Croatia at first welcomed the migrants, but quickly reversed itself.

One migrant, Salakh Arbash from Syria, said conditions at the Opatovac refugee center, are daunting.

“Now we are here from yesterday, we have waited for 12 hours on the border. Last night was very difficult for us because it was rainy and it was so cold. We have slept for two hours in the streets.”

Human Rights Watch said in a new report that Macedonian police have verbally and physically abused migrants, clubbing some of them with batons as they pass through the country from Greece heading north.

The humanitarian group said that based on interviews with 64 refugees, “It is plain to see that Macedonia has a problem with police violence against asylum seekers and migrants.”

Poland’s Foreign Minister Grzegorz Schetyna says Europe needs a united plan to address the ongoing refugee crisis, but not one that imposes quotas for individual countries stating how many people they should admit.

In an opinion piece published Monday by the newspaper Politico Europe, Schetyna said the first EU priority should be to seal its borders, and that the bloc should set up refugee reception centers to identify those who are refugees and those who are economic migrants.

“We cannot allow the refugee crisis to divide and antagonize Europe,” he wrote. “That is why we view the challenge put before us not in terms of compulsory quotas, which are probably outdated and insufficient by now, but in terms of solidarity.”

Schetyna said Poland is not opposed to taking in refugees, but the proposal for EU nations to divide 120,000 people would not fully address the problem.

“Instead we should be jumping into action with a broad plan that tackles the causes of the exodus as well as the symptoms. And we need to strike the right balance between helping those in need and guaranteeing the security of our citizens.”

He told reporters Sunday that nations such as Sweden, Germany and Austria have experience taking in migrants, while others in the EU do not.

More than 470,000 people have arrived in Europe this year, nearly 40 percent of them from Syria, according to the International Organization for Migration.

Kerry, speaking in Berlin, called the decision by the Obama administration a “step in keeping with America’s best tradition as a land of second chances and a beacon of hope.”

He also said the government will explore ways to boost the refugee visa limit beyond the 100,000 ceiling in future years.