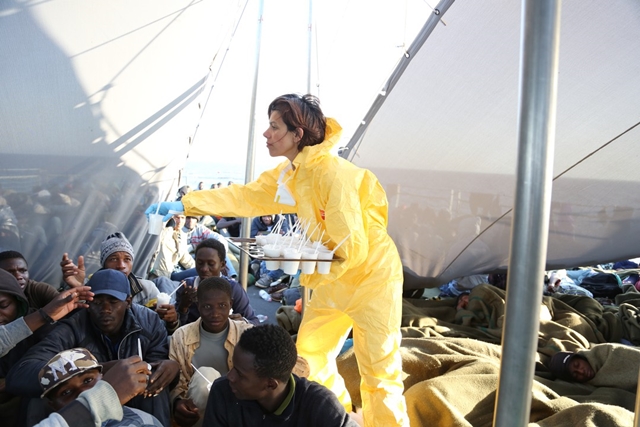 The interior ministers of Britain, France and Germany have called for a special meeting of European Union interior and justice ministers within the next two weeks to deal with the continent’s escalating migrant crisis.

The ministers said in a statement Sunday they want to find “concrete steps” to solve the growing migrant dilemma.

Macedonia declared a state of emergency earlier this month in response to daily border crossings from Greece of some 3,000 migrants pushing toward western European countries.

In Macedonia Sunday, some 500 migrants boarded a train that leaves twice a day from the southern town of Gevgelija headed for Macedonia’s southern border where they can cross over into Serbia.

From Serbia, as the migrants continue on their Balkan route to western Europe, the next country is Hungary.

However, Hungary announced Saturday it has completed the first section of a razor-wire barrier along its border with Serbia.

The French news agency, reporting Saturday, said the 175 kilometer-long barrier aimed at stopping the refugee flow has so far failed to prevent people from crossing into the country.

Hungary requires the migrants to be fingerprinted before entering temporary camps, causing concern for some.

Mark Kekesi, a volunteer with the advocacy group Migrant Solidarity said the migrants “are afraid of the Hungarian fingerprint regime because they are well aware of the fact that if their fingerprint is recorded in Hungary, then legally there is the opportunity for any western European country to send them back to Hungary.”

Hungary’s right-wing Prime Minister Vikot Orban said he is taking a hard line on migrants because he said they pose a threat to European security, prosperity and identity.

Meanwhile, Austrian police on Saturday pulled three children near death from dehydration from a van packed with 26 Syrian and South Asian refugees Saturday near the German border, as Europe faces its largest humanitarian crisis since World War Two.

Five men suspected of involvement in the deaths of 71 migrants found in a truck Thursday in Austria were ordered to be held by a Hungarian court.

Also Saturday, Libyan authorities say three people were arrested on suspicion of launching a boat packed with migrants bound for Italy that sank Thursday in the Mediterranean.  Officials say up to 200 people may have drowned.

The United Nations estimates 300,000 migrants from the Middle East, Africa and South Asia have fled to Europe this year to escape poverty and violence.

Hundreds have drowned in the Mediterranean, and authorities expect those tolls, as well as fatalities from land smuggling, to rise.

On Friday, United Nations chief Ban Ki-moon said he was “horrified and heartbroken” by the latest migrant deaths, both on land and at sea.

In a rare statement issued directly under his name, Ban said the conflicts and repression that force people to flee their homelands must be resolved.

He called on European governments to offer “comprehensive responses” aimed at expanding “safe and legal channels of migration” that also demonstrate “humanity and compassion.”

Ban said he plans a “special meeting devoted to these global concerns” on September 30, during the annual General Assembly of world leaders at U.N. headquarters in New York.