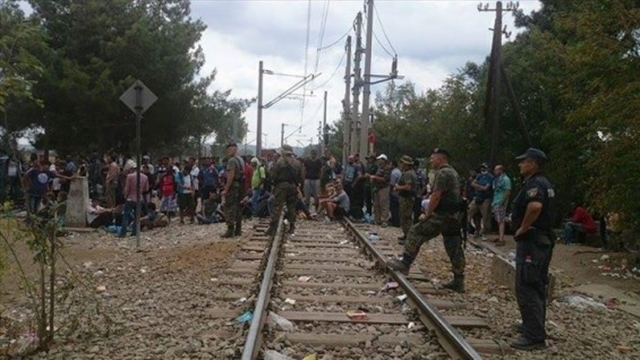 Macedonian riot police have cracked down on angry crowds of migrants stranded in a no-man’s land at the border with Greece, where thousands have been waiting for passage since Macedonia declared a state of emergency Thursday.

The migrants surged forward during the night, demanding passage through Macedonia as they seek to enter the European Union looking for jobs and better living conditions.

On Thursday, Macedonia declared a state of emergency and announced it will send troops to its border with Greece to stop illegal migrants from pouring into the country.

The move has stranded at least 1,500 men, women and children in a no-man’s land between the two countries.

Around 2,000 migrants a day have been crossing into Macedonia from Greece, and the economically poor country is struggling to handle the flow.

Nearly all the migrants are from Afghanistan, Iraq and Syria and fleeing war, terrorism and poverty in their home countries.

The U.N. said more than 160,000 migrants have arrived in Greece so far this year. They are trying to make it to EU countries by foot or train through Macedonia and Serbia.

Many of the migrants say there is an extra sense of urgency to get to the West before Hungary completes a fence along its borders.