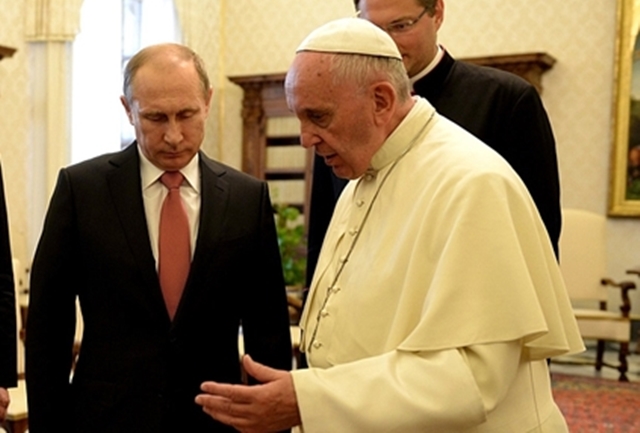 A Vatican statement released Wednesday after a one-hour meeting said the pontiff stressed there must be a “sincere and great effort” to end the rebellion launched by pro-Russian separatists 14 months ago.  Nearly 6,500 people have died in that fighting.

The statement also said the two leaders agreed on the importance of creating an atmosphere of dialogue and that “all parties commit to applying the Minsk [cease-fire] accords” signed in February by the warring sides, under German and French mediation.

The Minsk agreement requires both rebels and Ukraine forces to withdraw heavy weapons from the line of contact, but international observers have regularly reported violations of the agreement.

The Kremlin has repeatedly denied Western accusations that it is arming separatists and sending Russian troops across the border to fight.  It insists Russian fighters seen or captured in Ukraine’s east are volunteers.

Italy has firmly endorsed Western sanctions imposed on Moscow for its role in Ukraine, and Wednesday Renzi spoke of “divergent positions” on some issues, while praising their “traditional friendship.”

“We are in a difficult international situation, not just on account of issues which do not unite us, but also for issues which should see us ever more on the same side in an international scenario which is very complicated, starting with the global threat of terrorism,” said Renzi.

Earlier this week, the Group of Seven industrialized nations, including Italy, reaffirmed those sanctions at a summit in Germany.