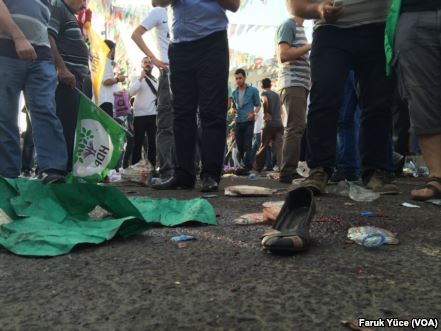 At least two are dead and dozens of people were injured in the second blast, which came in the early evening in this stronghold of the pro-Kurdish HDP party. A reporter saw blood and body parts at the epicenter, indicating the severity of the victims’ wounds.

Even as people tried to carry away the injured, military vehicles sped into the crowd. Security forces deployed water cannon and tear gas to disperse the crowd.

Some at the rally gathered rocks to fight back, but the crowd — tens of thousands, perhaps more — soon left the scene.

HDP leader Selahattin Demirtas appealed for calm, though he voiced suspicions about the timing of the attack.

The HDP poses a serious challenge to the ruling party. If the pro-Kurdish party breaks a 10-percent threshold in Sunday’s vote, it would take seats from the AKP, the party of President Tayip Recep Erdogan, who has broken precedent and engaged in sharp partisan politics on the AKP’s behalf in the run-up to the vote.

Heated anti-opposition rhetoric spilled over into violence Thursday, as ultranationlists attacked an HDP rally in the southeastern city of Erzurum. Security forces also broke up the rally with tear gas and water cannon.

No one has yet claimed responsibility for Friday’s blasts and investigations are under way. The first explosion was initially believed to be an electric fault and the rally continued. After the second blast 10 minutes later, those gathered understood otherwise — an observation later confirmed by Turkey’s energy minister, who ruled out any accident.

As the night wore on, residents of Diyarbakir were back on the streets, waving HDP flags from their cars, even as authorities called for people to come to local hospitals to donate blood for the victims. 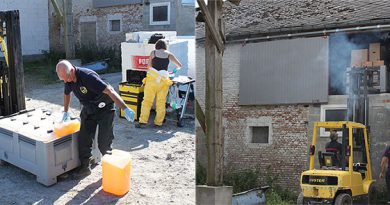