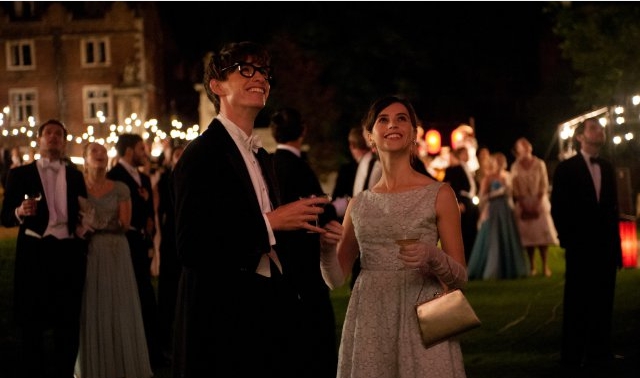 Stephen Hawking is one of the greatest minds of our time. Unfortunately, his compelling story of defying the odds and coming out on top did not make for one of the films of our time, not by a long shot, perhaps not even the film of the week. The focus of The Theory of Everything, directed by the helmer of the riveting documentary Man on Wire, James Marsh, is not Hawking’s life as a scientist, but rather his life as a man confronted with the severe physical limitation of suffering from motor neuron (more specifically, Lou Gehrig’s) disease.

Primarily, though, this is a love story, and anyone thinking they will learn much about Hawking’s contribution to mankind is in for a rude awakening.

Played with charisma and great charm by Eddie Redmayne, whose curious eyes and timid demeanor bring exactly the right dimension to the character, Hawking is shown at various stages of life, around 30 years in total that start at the time he met Jane Wilde, who would become his wife, until a meeting with Queen Elizabeth shortly after the publication of his A Brief History of Time.

While the story itself is engaging and adequately focused, the presentation is disastrous, with horrifying lighting choices that boost color and brightness to such an extent the scenes end up soaked in red, gold, white or a dark blue that verges on black.

(Still of Felicity Jones and Eddie Redmayne in The Theory of Everything. Photo by Liam Daniel – © UNIVERSAL PICTURES INTERNATIONAL)