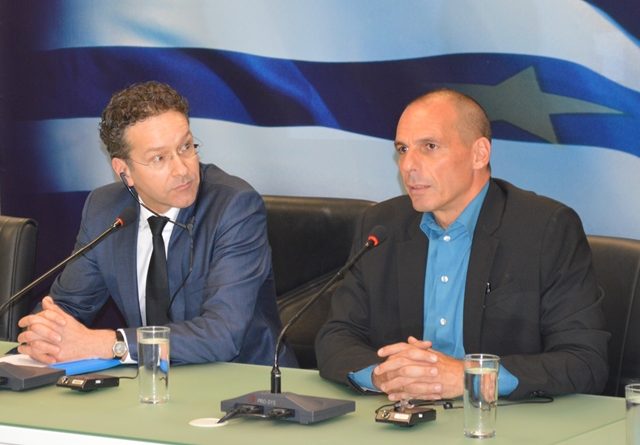 Greek Finance Minister Yanis Varoufakis said Wednesday he is optimistic Greece will receive an extension of up to six months of the current bailout package for the country and avoid possible bankruptcy.

“Our proposition will be written in such a way that it will cover both the demands of the Greek side and the head of the eurogroup,” Varoufakis said, referring to the group of eurozone finance ministers. “We are on the right path. I am optimistic it will end well tomorrow (Thursday) or the next day.”

Greece has until the end of the month to pay back its European lenders or negotiate a new deal. Failure could mean default and exit from the eurozone.

German Finance Minister Wolfgang Schaeuble said the bailout would not be extended unless Greece carries out promised economic reforms.

Greece’s new leftist prime minister, Alexis Tsipras, campaigned on promises of renegotiating the $270 billion bailout package. He said the terms agreed to by the former center-right government has made life difficult for many Greeks.

U.S. Treasury Secretary Jacob Lew spoke to Varoufakis by telephone Wednesday, urging him to work for a compromise.

The Treasury Department said Lew told his Greek colleague that “failure to reach an agreement would lead to immediate hardship in Greece, that the uncertainty is not good for Europe, and that time is of the essence.”

Greece was especially hard hit by the 2008 global economic crisis, requiring a huge bailout from the European Union and International Monetary Fund to avoid an economic meltdown.

One dead, four missing in floods in Czech Republic