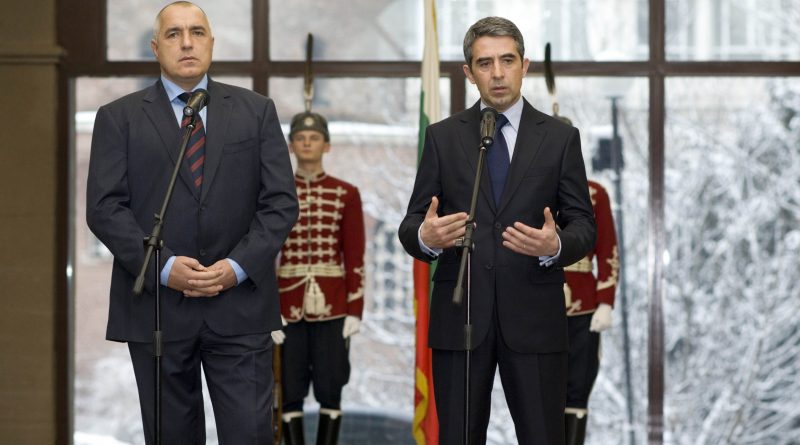 Sharp differences have emerged between Bulgaria’s Prime Minister and President and among the parties involved in the ruling coalition regarding the future of the country’s heads of the State Agency for National Security (SANS) and of the Interior Ministry.

Bulgaria’s Parliament this week approved changes to the Interior Ministry Act that would make it possible for both the current head of SANS, Vladimir Pisanchev, and Interior Ministry chief secretary Svetozar Lazarov to be replaced.

But against expectations, Prime Minister Boiko Borissov, whose centre-right coalition cabinet that took office in November 2014 inherited Pisanchev and Lazarov from the now-departed 2013/14 administration, said that he intended keeping both in place.

Given the open calls from senior figures in two political forces involved in keeping the current coalition cabinet in place, this prompted immediate speculation about ructions that could cause serious damage to the future coalition – although Borissov’s GERB party has denied that the future of the coalition is at risk.

The drama has been heightened by allegations regarding what reportedly was called “Operation Worms” involved alleged breaches of the law on covert surveillance, a scandal that began with claims – denied by top officials including Borissov – that under the now-departed administrations, SANS and the Interior Ministry had been involved in illegal covert surveillance of anti-government protesters.

Speaking on February 13, Borissov said that touching the special services at the moment would “inflame” the opposition (a reference to the Bulgarian Socialist Party and the Movement for Rights and Freedoms, partners in the 2013/14 ruling axis) and “they will start thinking we are seeking revenge and confrontation”.

Borissov told reporters that the current “peace of mind” that no illicit eavesdropping or politically-motivated persecution is going on would be lost if changes were made at the top of the special services.

He said that his government needed at least half a year of calm to accomplish what it had started to do.

“The easiest thing would be to purge them [the special service chiefs] but who will replace them and what good will it bring! They will start talking of a police state again. I have learnt my lessons,” said Borissov, who was prime minister from 2009 to early 2013 and whose interior minister in that government, Tsvetan Tsvetanov, has been facing charges in connection with illicit eavesdropping.

According to Borissov, Lazarov and Pisanchev had been “working very hard”.

He said that he would seek their replacement if the investigation into “Operation Worms” found that they had been involved in wrongdoing.

However, Borissov added that ultimately, if wrongdoing was found, the person to be held responsible was Plamen Oresharski (occupant of the prime minister’s chair in the 2013/14 cabinet).

The following day, President Rossen Plevneliev – who now again, after the Interior Ministry Act changes, has the power to appoint the SANS chief and the Interior Ministry chief secretary, on the recommendation of the cabinet – said that there were sufficient grounds for changes at the top of SANS.

Plevneliev said on February 14 that these grounds included the “Kostinbrod affair”, which involved allegations regarding blank ballot papers ahead of the May 2012 early parliamentary elections, the 2013 period when SANS was in service of unconstitutional attacks on the head of state, and the recent “Operation Worms” controversy.

Plevneliev did not say whether Lazarov should be replaced, saying only that it was in the government’s power to decide whether to recommend a change, “and then I will exercise the powers vested in me by the constitution”.

Deputy Prime Minister Meglena Kouneva, of the Reformist Bloc, said on February 15 that the bloc would come up with a joint declaration on February 17 on the issue of the future of Pisanchev and Lazarov.

Kouneva hinted that there were differing opinions. On February 13, Reformist Bloc parliamentary group co-leader Radan Kanev and the head of the internal security and public order committee, Atanas Atanassov, said that the decision by Borissov not to dismiss Pisanchev and Lazarov could shake the ruling coalition.

Also backing the dismissal of Pisanchev and Lazarov was Valeri Simeonov of the Patriotic Front, the nationalist coalition that backs the ruling coalition in Parliament.

Deputy Prime Minister Roumyana Buchvarova, of GERB, said that when the full facts about “Worms” were known, there would be less political speculation, and she spoke out against ultimatums being issued within the coalition.

On February 15, Roumen Petkov, deputy leader of socialist breakaway party ABC – which backs the coalition and has a deputy prime minister’s seat in the cabinet – said that the public talk on the issue was leading to demoralisation of Bulgar’s security sector as a whole.

Petkov, who was interior minister for most of the term of the 2005/09 Bulgarian Socialist Party tripartite cabinet, said that Plevneliev and Borissov “have telephones and perhaps it is appropriate to clarify such things before making public commitments”.

Petkov also criticised the Reformist Bloc’s Atanassov, who on February 5 made the initial allegations that there had been large-scale illegal eavesdropping on anti-government protesters, and went on to suggest that the Prime Minister had been misled by Prosecutor-General Sotir Tsatsarov and Interior Minister Vesselin Vuchkov about “Operation Worms”.
According to Petkov, it was “remarkable” that Borissov did not seem to be worried about Atanassov’s allegations about lying.

Meanwhile, with Sofia City Court head judge Vladimira Yaneva in the spotlight and under political attack for allegedly having authorised the use of covert surveillance for 300 days – a period well in excess of that allowed by law – the Bulgarian Judges Association (BJA) issued a statement on February 13 urged politicians discussing Operation Worms to focus on achieving genuine judicial reform and to adhere to a statesmanlike approach in constituting the Supreme Judicial Council and its Inspectorate instead of commenting on who should be charged and convicted.

The BJA appealed for respect for the principle of judicial independence, BTA reported.

“This fundamental constitutional principle requires from the representatives of the two other branches of government to refrain from any acts that could be perceived as interference with the performance of the judicial authorities’ functions,” the BJA said.

“Public statements by senior executive and legislative officials, which contain foregone conclusions about the commission of criminal offences, which specify the persons who must be acquitted and who must be convicted, jeopardize the State committed to the rule of law,” the BJA said.