Turkey has maintained an open door policy for people fleeing the conflict in neighboring Syria, but recent violent protests in several cities indicate many Turks are feeling the strain from harboring the one million refugees. Authorities say they may soon force the tens of thousands of Syrians living on the streets into camps.

Last week hundreds of Turks marched through the provincial city of Maras, shouting, “We do not want Syrians.” One man addressing the angry crowd, voices his frustration.

He says he has worked hard all his life, paid taxes and Syrians who have given nothing get more from the state than he does. He says the Syrians are foreigners and treated better than Turks.

Turkish analyst Sinan Ulgen, who heads the research organization Edam, says the protests send a powerful warning to the government.

“This is just the first signals that uncover the existing and growing social tension. So it is an alarm bell for the government to start think about, much more comprehensively, about the fate of Syrian refugees,” he said.

“Today,” added Ulgen, “there are more than 1.2 million refugees in Turkey and only 200,000 of them are in camps in southeast of Turkey. The rest are all over Turkey, in many cities including Istanbul, and they are faced with the fact that they cannot sustain anymore their livelihood economically.”

Officially about 100,000 Syrians live in Istanbul, Turkey’s largest city, but local charities claim the number is likely double that.

In every quarter of the city, Syrian families can be found begging for money, most sleep in parks and mosques. But citing growing public concern, Istanbul Governor Avni Mutlu has issued a stark warning, they could be forcibly sent to refugee camps.

Turkish authorities have spent billions of dollars constructing and supporting camps for Syrians. Observers point out the camps were built with the idea the Syrian conflict would end quickly, but with many Syrians spending years in them they are proving increasingly unpopular.

Abdullah and his wife and young family live on the Istanbul streets, surviving on charity collected by his two young children. But he says it is better than the camps.

He says they fled to Istanbul because they know other people who came here. He says life on the street is hard, but they lived for months in a camp and it was little better than a prison. He says on the street they are free and he has a chance to find work.

A few Syrians have found jobs in Istanbul’s large tourist sector, where speaking Arabic is useful. But for most a job remains a dream.

Analyst Ulgen warns Ankara must face up to the refugee reality and it needs help.

“Now it is clear that these people will not be going back to Syria anytime soon and therefore the government needs, with the collaboration of its partners in the West, to help them on a more long-term basis by providing the means for them to start to integrate in the Turkish labor market; organizing training, language courses,” he said. “I do not see any other solution to this dilemma.”

Ankara is pleading for help from its European neighbors, but there have been few offers, just praise of Turkey’s humanitarian efforts. Analysts say those words are proving cold comfort for a population, that is largely poor and increasingly asking how long will it have to shoulder the refugee burden. 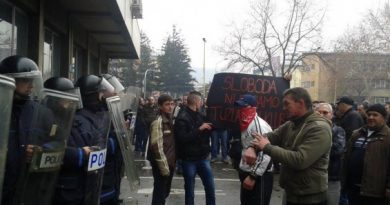 Clashes at Bosnia protests over unemployment and economic woes