Hundreds of pro-Russian militants stormed the police station in the southern Ukraine city of Odessa Sunday, and won the release of some of the activists arrested two days before.

The protesters bashed doors at one entrance to the station with a battering ram before pushing their way in through a garage. Authorities freed more than 60 of the 150 arrested Friday in clashes that led to a fire that killed 42 mostly pro-Russian activists.

Ukrainian prime minister Arseniy Yatseniuk visited the port city of one million people, declaring that Russia is seeking to destroy Ukraine by engineering clashes in eastern Ukraine and now Odessa. He accused Moscow of engaging in “well-planned provocation” against the interim Kyiv government.

Ukraine says it will continue pressing its military offensive against pro-Russian separatists in eastern Ukraine, as the Kremlin reported receiving thousands of calls for help from the region’s Russian-speaking citizenry.

Ukraine Interior Minister Arsen Avakov said troops had recaptured a television tower and government buildings from rebels in Kramatorsk, a town near the pro-Russian stronghold city of Slovyansk.

Ukraine’s National Security and Defense Council chief Andrily Parubiy said an anti-terrorist operation will be carried out in towns beyond Slovyansk and Kramatorsk.

In Moscow, a Kremlin spokesman (Dmitri Peskov) said Russian President Vladimir Putin had not yet decided how to respond to the offensive, or to the deaths in Odessa.

Russia currently has at least 40,000 troops and armor massed on its border with Ukraine, and the Kremlin says it reserves the right to enter the country to protect ethnic Russians.

A German newspaper, Bild am Sonntag, citing unnamed German security sources, said the U.S. Central Intelligence Agency and the Federal Bureau of Investigation are providing dozens of specialists to the Ukraine government to set up a security structure in the country and to fight organized crime.

In Kyiv, the interim government declared two days of mourning for those killed Friday in fighting in Odessa.

Witnesses say hours of street battles in the Black Sea port city ended in a deadly blaze at a trade union building where overmatched separatists had holed up seeking safety. It remains unclear who started the fire, but witnesses said gasoline bombs exploded around the building during the melee and gunfire was heard.

Kerry said Russia must now withdraw support for the separatists. Moscow says Kerry’s Russian counterpart, Sergei Lavrov, countered that Washington should compel the Kyiv government to stop its military offensive in the east.

U.N. Secretary-General Ban Ki-moon also welcomed the freeing of the seven observers with the Organization for Security and Cooperation in Europe. The monitors were freed Saturday, along with their five Ukrainian assistants.

And in Brussels, the European Union called for an independent investigation into the Odessa deaths. EU foreign policy chief Catherine Ashton said member-countries were “deeply saddened” by the deaths and injuries. 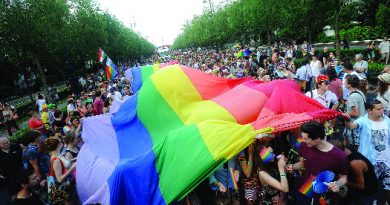