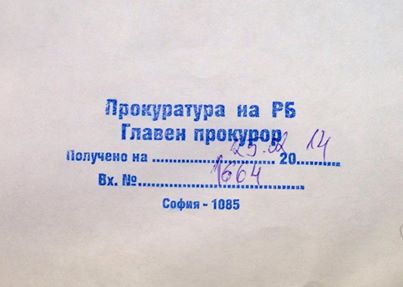 Tsvetan Vassilev, head of the supervisory board of Corporate Commercial Bank (CCB), has lodged a formal complaint with Bulgaria’s Prosecutor-General against what he calls false allegations against him by members of the anti-government Protest Network.

Vassilev, along with Movement for Rights and Freedoms MP Delyan Peevski and Bulgaria Without Censorship leader Nikolai Barekov, was the subject of allegations in a dossier handed to the Prosecutor-General’s office on February 25 2014 by Protest Network activists Nikolay Staykov, Antoaneta Tsoneva and Asen Genov. The dossier was based on media reports that the three asked the Prosecutor-General’s office to follow up.

A statement by the CCB on March 11 said that false statements by the three Protest Network members were contained not only in the dossier handed to the Prosecutor-General’s office and a number of other institutions but also in their subsequent statements and commentaries.

This, the bank said, meant that the three Protest Network members had violated a Penal Code provision against making false accusations.

The bank said that by lodging the complaint with the Prosecutor-General, Vassilev was availing himself of his right to defend his name and reputation and avert the attempts by the Protest Network and their “possible abbetors and accessories” to mislead the public with ridiculous defamatory statements.

The Protest Network dossier included at the time allegations that Vassilev, Peevski and Barekov were operating as an organised crime group (a specific crime under Bulgarian law), an allegation – among others – to which Vassilev took particular exception.

After the February 25 handover of the dossier, the Prosecutor-General Sotir Tsatsarov ordered an investigation, formally requesting the assistance of several other institutions, including the revenue authorities, central bank and State Agency for National Security.

On March 11, Staykov responded that Vassilev’s action was in contradiction with the Penal Code, “that urges and even obliges the citizens of Bulgaria to inform and co-operate with the Prosecution”.

“We see it as an attempt to threaten us and all the citizens of Bulgaria from doing so in the future. There are more than enough worrying data to be presented to the attention of the prosecution,” Staykov said.

In a Facebook post responding to reports of Vassilev’s complaint, Tsoneva said, “I am not in the least scared”.

In a Facebook post, Genov said that an interesting detail was that members of the Protest Network were shareholders in CCB, the shares in which were listed on the stock exchange and could be bought by anyone under the stock prices announced for the day.

“In formal terms, there is a dispute between the majority shareholder and minority shareholders and we are looking forward to the general meeting of the shareholders of the CCB and statements by its shareholders at it, which meeting by law must be held by the end of June of the year following the adoption of the annual financial statements,” Genov said.

Earlier, both Peevski and Barekov rejected as unfounded the allegations in the dossier.